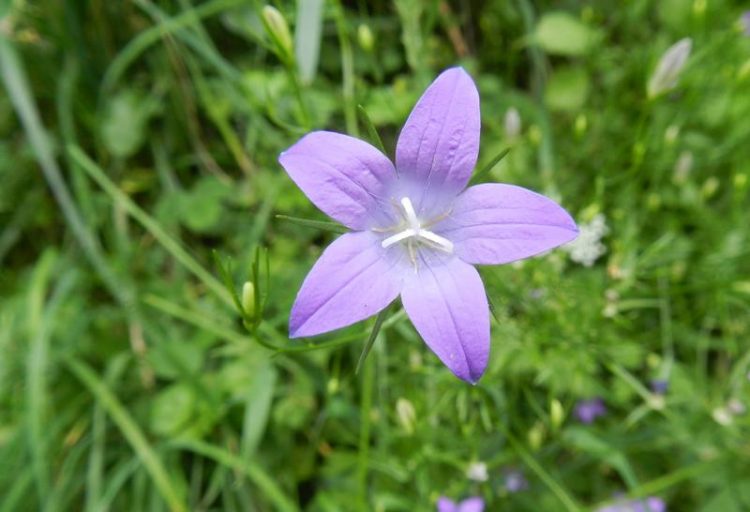 The spreading bellflower (Campanula patula) is one of the species most affected by decline in abundance in Mecklenburg-Vorpommern. Formerly found in two-thirds of all grid cells, it is now very rare, although not directly threatened with extinction. Copyright: University of Rostock / Florian Jansen

Two-thirds of the 355 plant species studied are less common today than they used to be. “The species showing the steepest decline are not the endangered species and those vulnerable to extinction, but those that used to occur in 25-50% of all 5 km by 5 km grid cells,” said Professor Florian Jansen of the Faculty of Agriculture and Environmental Sciences at the University of Rostock.

The research team led by Professor Jansen used the systematic survey of all vascular plants carried out by volunteer field surveyors between 1977 and 1988 and compared it with observations from the survey of endangered habitats commissioned by the M-V State Agency for the Environment, Nature Conservation and Geology 20 years later between 1996 and 2006.

Contrary to expectations, no correlation was found between the Red List category of the species and their decline in frequency. This could indicate that the protective measures taken for these species had at least some degree of success, according to Jansen.

“In many cases, however, the frequency of the former “common species” has declined to less than half,” said the Rostock biologist. The researchers attribute this to changes in habitats caused by changes in land use. Species that only occur in a few habitat types have declined more than those with less specific site requirements.

The scientists blame the decline in biodiversity among other things on the massive use of artificial fertilizers in agriculture since the 1980s.
According to the team of researchers, the current conservation practice of protecting only rare plant species must be called into question.

“For the food chain, especially for insects that depend on the plants directly for nutrition, larval or overwintering habitat, the loss of moderately frequent species probably has a much greater impact than the loss of rare species,” said Jansen.
Within the framework of the research project “sMon” further data sets are to be analyzed in order to evaluate changes and trends in biodiversity throughout Germany.

Caption: The spreading bellflower (Campanula patula) is one of the species most affected by decline in abundance in Mecklenburg-Vorpommern. Formerly found in two-thirds of all grid cells, it is now very rare, although not directly threatened with extinction

Link to the research project: https://www.idiv.de/de/sdiv/arbeitsgruppen/wg_pool/smon.html