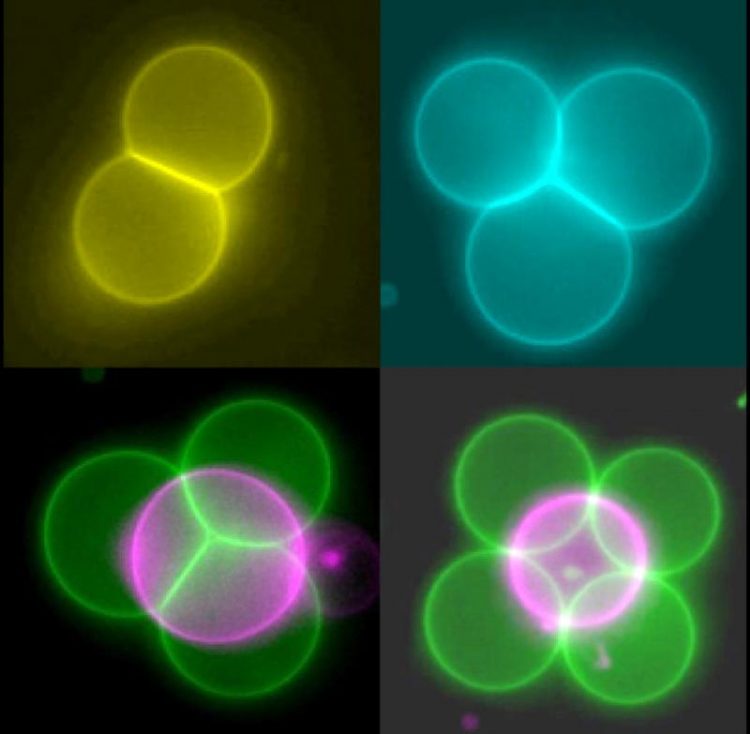 The team say that by altering artificial cell membranes they can now get the cells to stick together like 'stickle bricks' – allowing them to be arranged into whole new structures.

Biological cells can perform complex functions, but are difficult to controllably engineer.

Artificial cells, however, can in principle be made to order. Now, researchers from Imperial College London and Loughborough University have demonstrated a new level of complexity with artificial cells by arranging them into basic tissue structures with different types of connectivity.

These structures could be used to perform functions like initiating chemical reactions or moving chemicals around networks of artificial and biological cells. This could be useful in carrying out chemical reactions in ultra-small volumes, in studying the mechanisms through which cells communicate with one another, and in the development of a new generation of smart biomaterials.

Cells are the basic units of biology, which are capable of working together as a collective when arranged into tissues. In order to do this, cells must be connected and be capable of exchanging materials with one another. The team were able to link up artificial cells into a range of new architectures, the results of which are published today in Nature Communications.

The artificial cells have a membrane-like layer as their shell, which the researchers engineered to 'stick' to each other. In order to get the cells to come close enough, the team first had to manipulate the cells with 'optical tweezers' that act like mini 'tractor beams' dragging and dropping cells into any position. Once connected in this way the cells can be moved as one unit.

Lead researcher Dr Yuval Elani, an EPSRC Research Fellow from the Department of Chemistry at Imperial, said: “Artificial cell membranes usually bounce off each other like rubber balls. By altering the biophysics of the membranes in our cells, we got them instead to stick to each other like stickle bricks.

“With this, we were able to form networks of cells connected by 'biojunctions'. By reinserting biological components such as proteins in the membrane, we could get the cells to communicate and exchange material with one another. This mimics what is seen in nature, so it's a great step forward in creating biological-like artificial cell tissues.”

The team were also able to engineer a 'tether' between two cells. Here the membranes are not stuck together, but a tendril of membrane material links them so that they can be moved together.

Once they had perfected the cell-sticking process, the team were able to build up more complex arrangements. These include lines of cells, 2D shapes like squares, and 3D shapes like pyramids. Once the cells are stuck together, they can be rearranged, and also pulled by the laser beam as an ensemble.

Finally, the team were also able to connect two cells, and then make them merge into one larger cell. This was achieved by coating the membranes with gold nanoparticles. When the laser beam at the heart of the 'optical tweezer' technology was concentrated at the junction between the two cells, the nanoparticles resonated, breaking the membranes at that point. The membrane then reforms as a whole.

Merging cells in this way allowed whatever chemicals they were carrying to mix within the new, larger cell, kicking off chemical reactions. This could be useful, for example, for delivering materials such as drugs into cells, and in changing the composition of cells in real time, getting them to adopt new functions.

Professor Oscar Ces, also from the Department of Chemistry at Imperial, said: “Connecting artificial cells together is a valuable technology in the wider toolkit we are assembling for creating these biological systems using bottom-up approaches. We can now start to scale up basic cell technologies into larger tissue-scale networks, with precise control over the kind of architecture we create.”

The research is one of the first results from FABRICELL, a virtual research centre led by Imperial and Kings College London that brings together leading research groups working in artificial cell science in London. It consists of a series of labs across Imperial and Kings, as well as formal and informal education and research opportunities.