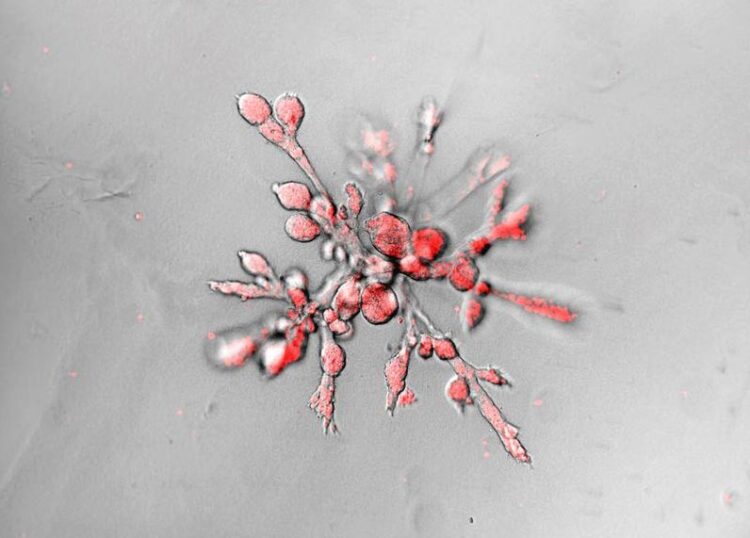 – complex interactions of cells and tissue.

In addition to chemical factors, mechanical influences play an important role in the natural growth of human organs such as kidneys, lungs and mammary glands – but also in the development of tumors. Now a research team at the Technical University of Munich (TUM) has investigated the process in detail using organoids, three-dimensional model systems of such organs which are produced in the laboratory.

Organoids are three-dimensional systems modeling various human organs. Grown in the laboratory, they exhibit properties similar to those of actual body tissue. Organoids offer science new opportunities to simulate and investigate the processes of organ growth. These processes could not be observed in the simplified two-dimensional model systems used in the past.

Using mammary gland organoids to analyze the complex interactions of cells with surrounding tissue, scientists at the Technical University of Munich, the Helmholtz Zentrum München and the Ruhr-Universität Bochum have shown, that the growth of the gland tissue in the human breast is explicitly influenced by the mechanical properties of the surrounding collagen network.

The organoids grown by the team form branched glandular ducts whose structure and organization very closely resemble that of the human mammary gland. During the growth process the individual organoid branches invade into the surrounding collagen matrix.

“Starting with a single stem cell, in just 14 days these organoids form a complex, branched, three-dimensional structure consisting of several thousand cells. This is absolutely fascinating,” says Andreas Bausch, Professor for Cellular Biophysics at TU Munich and head of the research group.

The research team used temporally resolved microscopy on the growing structures over the course of several days and successfully monitored the dynamic development process in detail. They discovered that the organoid growth is substantially dictated by collective movements of the cells.

By expanding in the direction of movement and then contracting again, the cells generate forces so strong that they deform the surrounding collagen matrix, making it possible for the organoid to independently organize the direction of its own further growth.

“This is made possible by the mechanical plasticity of the collagen,” says Benedikt Buchmann, lead author of the research team’s study. “When the individual cells move back and forth collectively they produce such tension that the cells of a branch can deform the collagen matrix.”

The overall process results in the formation of a mechanically stable collagen ‘cage’ which ultimately surrounds the growing branch. This collagen cage then controls the further generation of tension, the growth of the branches and the plastic deformation of the matrix.

These findings provide the basis for the use of this model system to investigate more complex processes such as the first steps in metastasis or mutual interaction with other cell types. Intensive current research is now on the way to determine whether this self-organization mechanism also occurs in other organs.

The research activities were funded by the European Research Council (ERC) as part of the ERC Synergy Grant “PoInt” and by the Collaborative Research Center SFB 1032 of the German Research Foundation (Deutsche Forschungsgemeinschaft, DFG). The Helmholtz Zentrum München and the St. Josef Hospital at the Ruhr-Universität Bochum (RUB) were partners in the project.