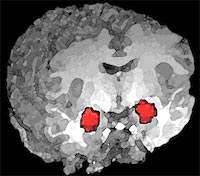 The amygdala is a region of the brain known to be important for responses to threats and learning about threats. Its function regulating stress hormones undergoes significant changes as the brain matures, Yerkes research suggests. Image courtesy of NIMH

The amygdala is a region of the brain known to be important for responses to threatening situations and learning about threats. Alterations in the amygdala have been reported in psychiatric disorders such as depression, anxiety disorders like PTSD, schizophrenia and autism spectrum disorder. However, much of what is known about the amygdala comes from research on adults.

“Our findings fit into an emerging theme in neuroscience research: that during childhood, there is a switch in amygdala function and connectivity with other brain regions, particularly the prefrontal cortex,” says Mar Sanchez, PhD, neuroscience researcher at Yerkes and associate professor of psychiatry and behavioral sciences at Emory University School of Medicine. The first author of the paper is postdoctoral fellow Jessica Raper, PhD.

The findings are part of a larger longitudinal study at Yerkes National Primate Research Center, examining how amygdala damage within the first month of life affects the development of social and emotional behaviors and neuroendocrine systems in rhesus monkeys from infancy through adulthood. The laboratories of Sanchez and Yerkes researchers Jocelyne Bachevalier, PhD and Kim Wallen, PhD are collaborating on this project.

Previous investigations at Yerkes found that as infants, monkeys with amygdala damage showed higher levels of the stress hormone cortisol. This surprising result contrasted with previous research on adults, which showed that amygdala damage results in lower levels of cortisol.

The team hypothesized that damage to the amygdala generated changes in the HPA axis: a network of endocrine interactions between the hypothalamus within the brain, the pituitary and the adrenal glands, critical for reactions to stress.

“We wanted to examine whether the alterations in stress hormones seen during infancy persisted, and what brain changes were responsible for them,” Sanchez says. “In studies of adults, the amygdala and its connections are fully formed at the time of the manipulation, but here neither the amygdala or its connections were fully matured when the damage occurred.”

In the current paper, the authors demonstrated that in contrast with adult animals with amygdala damage, juvenile monkeys with early amygdala damage had increased levels of cortisol in the blood, compared to controls. In their cerebrospinal fluid, they also had elevated levels of corticotropin releasing factor (CRF), the neuropeptide that initiates the stress response in the brain. Elevated CRF and cortisol are linked to anxiety and emotional dysregulation in patients with mood disorders.

Despite the increased levels of stress hormones, monkeys with early amygdala damage exhibit a blunted emotional reactivity to threats, including decreased fear and aggression, and reduced anxiety in response to stress. Still, monkeys with neonatal amygdala damage remain competent in interacting with others in their large social groups. These findings are consistent with reports of human patients with damage to the amygdala, Raper says.

“We speculate that the rich social environment provided to the monkeys promotes compensatory mechanisms in cortical regions implicated in the regulation of social behavior,” she says. “But neonatal amygdala damage seems more detrimental for the development of stress neuroendocrine circuits in other areas of the brain.”

The investigators plan to follow the animals into adulthood to investigate the long-term effects of early amygdala damage on stress hormones, behavior and physiological systems possibly affected by chronically high cortisol levels, such as immune, growth and reproductive functions.