Mast Cells Give Clues in Diagnosis, Treatment of Dengue 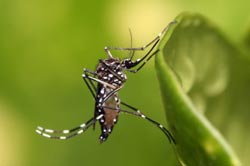 Their study also found that in experiments in mice, a class of drugs commonly used to treat asthma by targeting the mast cells could help treat vascular symptoms associated with dengue infections. The findings were published in the online journal eLife on April 30, 2013.

Dengue virus is spread by mosquitoes and infects as many as 390 million people worldwide each year, according to new estimates published in the journal Nature. It is a significant health issue in tropical areas of the world including parts of Latin America and Asia, but Florida residents have reported cases in recent years.

No treatments are available for dengue virus, and serious cases can result in widespread vascular leakage and hemorrhaging.

In 2011, Duke researchers reported that mast cells, which help the body respond to bacteria and other pathogens, play a role in attacking dengue virus and halting its spread. This finding presented new avenues for research, given the existing classes of drugs that target mast cells or the products of mast cells once they are activated.

In one experiment in the current study of dengue virus in mice, the researchers found that certain classes of drugs commonly used to treat asthma are effective in limiting vascular leakage associated with dengue.

“It may not seem intuitive how asthma and dengue infection would be related and would respond to the same types of drugs, but because both diseases are promoted by mast cells, the cellular targets of the class of drugs is quite effective,” said lead author Ashley L. St. John, PhD, assistant professor of emerging infectious diseases at Duke-NUS.

The researchers continued to investigate the role of mast cells in attacking dengue virus in humans, and identified a biomarker – a mast cell-derived product – that appeared to predict the illness’ most severe cases in human patients.

Most patients infected by a dengue virus develop a high fever, dubbed dengue fever, and recover on their own. However, a small number of these cases develop into dengue hemorrhagic fever, a dangerous condition marked by serious complications, including bleeding, respiratory distress and severe abdominal pain.

Until now, doctors have not been able to predict who will develop dengue hemorrhagic fever. When the researchers studied blood serum samples from patients with dengue infection, they found that the levels of a protein produced by mast cells, chymase, were significantly higher in the patients who developed dengue hemorrhagic fever compared to those who recovered after dengue fever.

“In addition to revealing a potential new way to diagnose and treat dengue infections, these findings may have much broader applicability for other infectious diseases where vascular leakage is a major pathologic outcome,” said senior study author Soman N. Abraham, PhD, professor of pathology, immunology, and molecular genetics and microbiology at Duke Medicine and professor of emerging infectious diseases at Duke-NUS.

Other coauthors include Abhay P. S. Rathore, Raghavan Bhuvanakantham and Mah-Lee Ng of the department of microbiology at the National University of Singapore.

Funding was provided by the National Institutes of Health (R21 DA029731 and R01 DK077159), the National Medical Research Council of Singapore and the Duke-NUS Signature Research Program funded by Singapore’s Ministry of Health.