Home / Life Sciences and Chemistry / Manganese instead of precious metals
03.08.2021 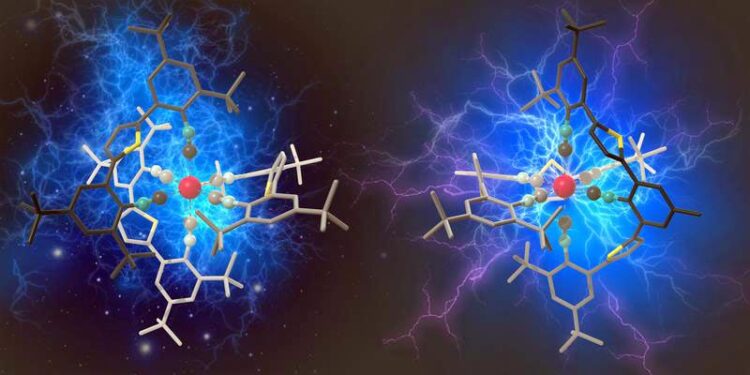 For the first time, Manganese complexes show the types of luminescent properties and photocatalytic behavior that were primarily associated with noble metal compounds until now.
Credit: Jakob Bilger, University of Basel

Manganese could make luminescent materials and the conversion of sunlight more sustainable.

University of Basel researchers have reached an important milestone in their quest to produce more sustainable luminescent materials and catalysts for converting sunlight into other forms of energy. Based on the cheap metal manganese, they have developed a new class of compounds with promising properties that until now have primarily been found in noble metal compounds.

Smartphone screens and catalysts for artificial photosynthesis – to produce fuels from sunlight, for example – often contain very rare metals. Iridium, for instance, which is used in organic light-emitting diodes (OLEDs), is rarer than gold or platinum. Ruthenium, used in solar cells, is also one of the rarest stable elements. These metals are not only very expensive, by virtue of their scarcity, but also toxic in many compounds.

Now, a team led by Professor Oliver Wenger and his doctoral student Patrick Herr from the University of Basel have for the first time succeeded in producing luminescent manganese complexes in which exposure to light causes the same reactions to take place as in ruthenium or iridium compounds. The findings have been published in the journal Nature Chemistry. The advantage of using manganese is that the element is 900,000 times more abundant in the Earth’s crust than iridium, as well as being significantly less toxic and many times cheaper.

At present, the new manganese complexes perform worse than iridium compounds in terms of their luminous efficiency. However, the light-driven reactions that are needed for artificial photosynthesis such as energy- and electron-transfer reactions take place at high speed. This is due to the special structure of the new complexes, which leads to an immediate charge transfer from the manganese toward its direct bonding partners on excitation with light. This design principle for complexes is already used in certain types of solar cells, although until now it has mostly featured noble metal compounds, and sometimes complexes based on the less noble metal copper.

The absorption of light energy normally causes greater distortion in complexes made of cheap metals than it does in noble metal compounds. As a result, the complexes begin to vibrate and a large part of the absorbed light energy is lost. The researchers were able to suppress these distortions and vibrations by incorporating tailor-made molecular components into the complexes in order to force the manganese into a rigid environment. This design principle also increases the stability of the resulting compounds and their resistance to decomposition processes.

Until now, no one has succeeded in creating molecular complexes with manganese that can glow in solution at room temperature and that have these special reaction properties, says Wenger. “Patrick Herr and the involved postdocs really made a breakthrough in this respect – one that opens up new opportunities beyond the field of noble metals.” In future research projects, Wenger and his group want to improve the luminescent properties of the new manganese complexes and anchor them on suitable semiconductor materials for use in solar cells. Other possible refinements include water-soluble variants of the manganese complexes that could potentially be used in place of ruthenium or iridium compounds in the photodynamic therapy used to treat cancer.