Making Colors from Black and White 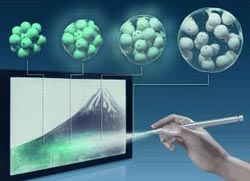 In the journal Angewandte Chemie, Japanese scientists have now introduced a new type of colorfast, environmentally friendly pigment. These consist of submicrometer-sized silicon dioxide particles and carbon black and are simply sprayed on to the desire surface. The resulting color is tough and does not fade.

Organic dyes fade when exposed to UV light. Inorganic pigments do not fade but are often based on toxic heavy metals such as chromium. In contrast, Yukikazu Takeoka, Shinya Yoshioka and their co-workers at the Universities of Nagoya and Osaka have selected silicon dioxide (SiO2), the main component of sand, as the basis for their novel pigments. Submicrometer-sized SiO2 particles look white to the human eye, so where does the color come from?

Conventional pigments absorb some portion of visible light; the reflected portions then combine to produce a certain color. A different type of color generation, known as structural color, is broadly found in nature, for example among butterflies: Arrays of very small particles can also appear colored without absorption by causing wavelength-dependent optical interference, refraction, and light scattering. The color depends of the particle size.

Structural colors are normally iridescent—their color appearance changes depending on the angles of irradiation and observation. This results from the high degree of order of the particles in their crystal lattice. To prevent this, the researchers aimed to avoid crystallization, maintaining their particles in a noncrystalline, amorphous arrangement—a very difficult challenge. The scientists solved this problem by dispersing silicon dioxide nanoparticles in methanol and spraying them onto the surface to be colored.

The methanol evaporates during the spraying process, so the SiO2 lands on the surface as a dry powder, forming a thin, even membrane of amorphous particles; it is given no chance to crystallize. Furthermore, a polyelectrolyte can be used to stabilize the structure of the colloidal amorphous array. Depending on the particle size, the researchers obtained membranes that ranged in color from whitish blue (230 nm) to whitish pink (360 nm).

These amorphous structures only produced very pale colors. However, the team found a solution to this problem: when particles of carbon black were added, the color saturation was significantly increased. The reason for this is that the carbon black particles reduce light scattering over the entire visible spectrum. This new technology thus allows for intensely colored images with many saturated colors as well as Japanese-style paintings in pale colors.

Besides for art objects, the pigments could be used for architectural paints and automotive coatings as well as in cosmetic products.