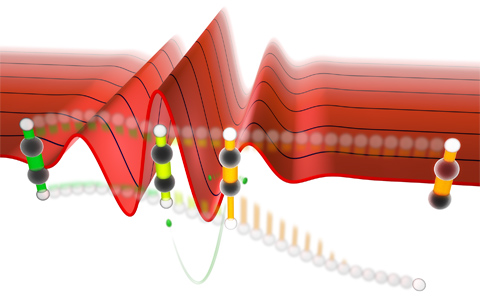 Figure 1: Illustration of the directional proton emission in acetylene with a specific laser waveform. The superposition of vibrational modes, which are responsible for the selective bond breaking, results from a combination of laser excitation of the anti-symmetric CH stretching mode and excitation of the symmetric CH stretching mode through ionization steps. The ionization steps are indicated by a change in colour from green (neutral) over yellow (cation) to orange (dication). (Graphic: Christian Hackenberger, MPQ, Attosecond Physics division)

Chemical bonds between carbon and hydrogen atoms are amongst the strongest in nature and their selective breaking, in particular in symmetric molecules, is of interest to chemical synthesis and the development of new biologically active molecules.

An international team of scientists has now demonstrated that ultrashort light pulses with perfectly controlled waveforms can selectively break C-H bonds in acetylene ions. The researchers demonstrated that a suitable choice of the laser-pulse waveform leads to breaking of the C-H bond on the left (or right) side of the symmetric H-C≡C-H molecule. The scientists propose that their results can be understood by a new quantum control mechanism based on light induced vibration (Nature Communications, DOI:10.1038/ncomms4800).

Hydrocarbons play an important role in organic chemistry, combustion, and catalysis. Selective breaking of C-H-bonds, can further enable novel synthesis of molecular species with new functionalities and applications in medicine. Until now a method for breaking C-H bonds selectively in symmetric hydrocarbons did not exist.

Prof. Ali Alnaser (American University of Sharjah, UAE), who spent his sabbatical in the division of Prof. Ferenc Krausz at the Max Planck Institute of Quantum Optics (MPQ) as part of the collaboration between MPQ, the King Saud University (KSU), and the Ludwig-Maximilians-Universität Munich (LMU), and a team of physicists led by Prof. Matthias Kling (LMU) used ultrashort laser pulses to solve this problem.

An important ingredient in making the experiments successful was the use of a high repetition rate laser system with ten thousand pulses per second in the group of Prof. Ulf Kleineberg (LMU), whereby the measuring times could be reduced compared to so far available systems. Mechanistic insight into how the laser light interacts with the molecules is provided by a theoretical model developed in the group of Prof. Regina de Vivie-Riedle (LMU).

For their experimental studies, the researchers used acetylene (C2H2): In this molecule the two carbon atoms are strongly bound by three electron pairs, while the hydrogen atoms symmetrically terminate the linear molecule on both ends. The scientists exposed a supersonic jet of C2H2 molecules inside a so called reaction microscope to ultrashort laser pulses with duration of only 4 fs (1 fs = 10 to the minus 15 seconds). These pulses, generated in the Laboratory for Attosecond Physics of Prof. Ferenc Krausz (MPQ, LMU), have infrared wavelengths and consist of only a few cycles.

The waveform of the light waves was precisely measured (see figure) for each laser shot interacting with the molecules. “As a result of the interaction with the light wave, the molecule fragments after its double ionization into a positively charged C2H+ ion and a proton, which are both detected with the reaction microscope.”, says Prof. Ali Alnaser. Since acetylene is a symmetric molecule, the C-H bonds on both sides of the molecule typically break with equal probability. In their experiment however, the scientists found that the laser waveform provides a means to increase the probability that the left versus the right C-H bond breaks and vice versa (see figure).

Quantum dynamical simulations show the nature of the laser-molecule interaction. “The already known scheme, where molecular reactions are controlled by electron dynamics prepared with the light waveform via laser-induced coupling of electronic states, does not work in this case. We discovered a new quantum control pathway.”, Prof. de Vivie-Riedle explains. According to her new model, the few cycle laser pulse initially excites a subset of vibrations of the molecule that are laser-active.

One of these vibrations is the anti-symmetric stretching mode, where one CH bond is elongated while the other is shortened. When the laser pulse reaches its peak electric field, it removes an electron from the triple-bond of the CC group (the molecule ionizes). By this process additionally laser-inactive vibrational modes are populated. Among those modes is the symmetric CH stretching mode, where both H atoms move synchronously towards or away from the CC group.

In the remainder of the laser pulse, the freed electron is accelerated back onto the molecular cation, removes a second electron and creates the acetylene dication, which rapidly dissociates into the proton and the C2H+ ion that are observed in the experiment.

“Independent excitation of vibrations of the molecule is insufficient to explain the experimental results. A prerequisite for the observed control is a quantum effect: the superposition of the symmetric and anti-symmetric stretching modes. As a consequence of that interference, a situation can be created where only one CH bond vibrates and the other one remains frozen.”, explains Prof de Vivie-Riedle.

“This type of shaking of the molecule leads to breaking of a particular CH bond. The laser waveform controls the direction into which the vibrational wave packet, which results from the superposition of the vibrational modes, moves once it is created on the acetylene dication.”, adds Prof. Matthias Kling.

The researchers see the results of their studies as a proof-of-principle for a new quantum control mechanism. “The laser waveform control mechanism is very general and we foresee that it may be applied to other, more complex molecular processes.”, says Prof. Ali Alnaser, who wants to continue research into this direction. He adds: “While we have excited the vibrations non-resonantly

in our study, higher degrees of control can be reached with resonant excitation using ultrashort laser pulses in the mid-infrared. Such laser systems are currently being developed and pave the way to exploit the full potential of the new control scheme.” [MK/OM]