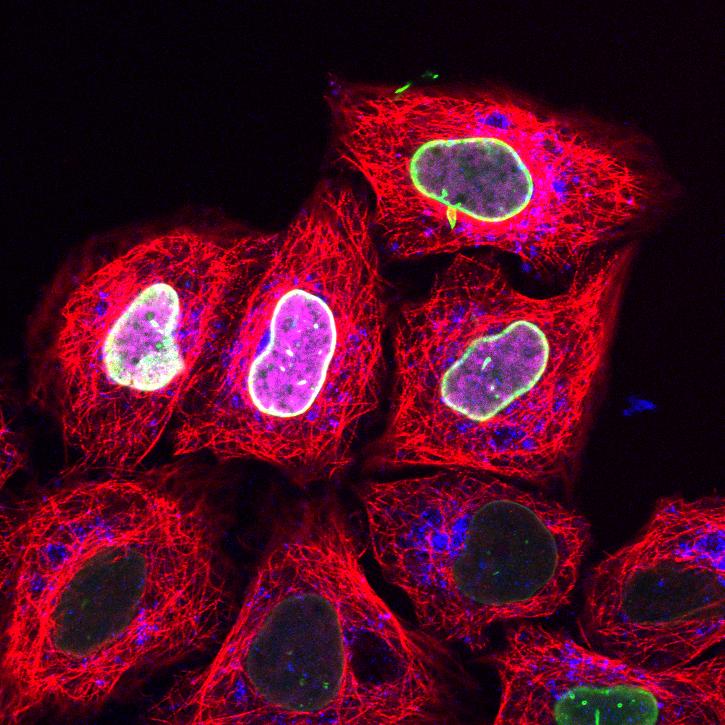 Utilizing the lock-and-key element, the nuclear envelope protein Lamin A was stained with fluorescently labeled trisNTA (green). Other proteins can be visualized simultaneously within the same cell. GU

Tracing distinct proteins in cells is like looking for a needle in a haystack. In order to localize proteins and decipher their function in living cells, researchers label them with fluorescent molecules. However, the delivery of protein markers is often insufficient.

A group of researchers from the Goethe University, working in close collaboration with US colleagues, has now found a solution for this problem. In the current issue of Nature Communications, they report on a process that uses pressure to deliver chemical probes in a fine-tuned manner into living cells.

“Although more and more protein labeling methods utilize synthetic fluorescent dyes, they often suffer from problems such as cell permeability or low labeling efficiency. Moreover, they cannot always be combined with other protein labeling techniques”, explains Dr. Ralph Wieneke from the Institute of Biochemistry at the Goethe University.

Recently, the working group led by Wieneke and Prof. Robert Tampé developed a marker that localizes selected proteins in cells with nanometre precision. This highly specific lock-and-key element consists of the small synthetic molecule trisNTA and a genetically encoded His-tag.

In order to deliver this protein marker into cells, the researchers from Frankfurt, together with colleagues from the Massachusetts Institute of Technology (MIT), Cambridge, USA, applied a procedure in which a mixture of cells together with the marker were forced through narrow constrictions.

This process is called cell squeezing. Under pressure, the cells incorporate the fluorescent probes with an efficiency rate greater than 80 percent. In addition, the process enabled to squeeze one million cells per second through the artificial capillary in high-throughput.

Since the marker binds very efficiently and specifically to the target protein and its concentration can be precisely regulated within the cell, the researchers were able to record high resolution microscopy images in living cells. Moreover, they were able to trace proteins with the marker only when activated by light. Thus, cellular processes can be observed with high precision in terms of space and time.

The researchers can even combine their labeling methods with other protein labeling techniques in living cells to observe several proteins simultaneously in real time. “Utilizing cell squeezing, we were able to deliver a number of fluorescently labeled trisNTAs in cells. This tremendously expands the scopes of conventional as well as high resolution microscopy in living cells”, explains Prof. Robert Tampé. In future, it will be possible to follow dynamic processes in living cells in time and space at high resolution.

A picture is available for downloading here: (We will insert a link)
Caption: Utilizing the small lock-and-key element, the nuclear envelope protein Lamin A was stained with fluorescently labeled trisNTA (green). By orthogonal labeling methods, other proteins can be visualized simultaneously within the same cell (Histon 2B in magenta; Lysosomes in blue; Microtubuli in red).

Goethe University is a research-oriented university in the European financial centre Frankfurt founded in 1914 with purely private funds by liberally-oriented Frankfurt citizens. It is dedicated to research and education under the motto “Science for Society” and to this day continues to function as a “citizens’ university”. Many of the early benefactors were Jewish. Over the past 100 years, Goethe University has done pioneering work in the social and sociological sciences, chemistry, quantum physics, brain research and labour law. It gained a unique level of autonomy on 1 January 2008 by returning to its historic roots as a privately funded university. Today, it is among the top ten in external funding and among the top three largest universities in Germany, with three clusters of excellence in medicine, life sciences and the humanities.