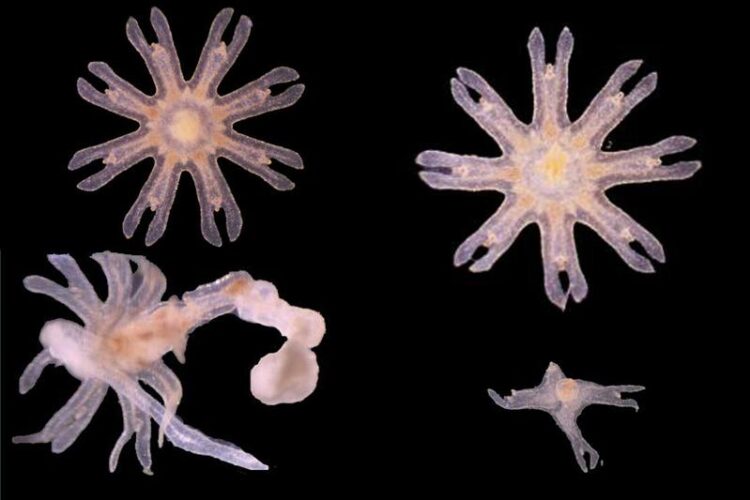 Comparison of germ-free (bottom row) and natural epyhrae: The external appearance shows that jellyfish without a natural microbiome are affected in their fitness.
© Dr Nancy Weiland-Bräuer

The body tissue of all multicellular living beings is colonized by an unimaginably large number of microorganisms. Host organisms and microbes have developed together from the very beginning of the evolutionary history of multicellular life. The natural microbiome, i.e. the totality of these bacteria, viruses and fungi that live in and on a body, therefore plays a fundamental role in the functioning of the entire organism: it supports, for example, the absorption of nutrients, fends off pathogens and even communicates with the nervous system.

A research team from the Institute of General Microbiology (IfAM) at Kiel University headed by Professor Ruth Schmitz-Streit has now investigated the importance of the natural microbiome for the healthy functioning of the organism and reproduction in simple marine organisms using the Aurelia aurita jellyfish. The scientists showed that animals without a natural microbial colonization are affected in their fitness and a decisive transformation process of their reproductive cycle, which runs in several stages, is completely prevented. The researchers recently published their results in the journal mBio in cooperation with colleagues from the GEOMAR Helmholtz Centre for Ocean Research Kiel in the framework of the Collaborative Research Centre (CRC) 1182 “Origin and Function of Metaorganisms”.

The new study of the Kiel research team is based on an earlier work in which the composition of the natural microbiome of the jellyfish was determined. The animals, similar to many other marine cnidarians, have a complex microbial colonization consisting of several hundred different species. This microbiome proves to be very stable, largely independent of the geographical origin and the microbial occurrence in the surrounding water. Its composition is therefore probably mainly controlled by the host organism itself and consists mainly of numerous different, so-called gram-negative gamma-proteo bacteria.

The researchers have now carried out extensive experiments on the effects of the microbiome on the fitness and reproduction of jellyfish. “To do this, we first sterilized the polyps of the jellyfish with an antibiotic treatment and examined the effects on the organism,” explains Dr Nancy Weiland-Bräuer, scientist in the Molecular Biology of Microorganisms group at IfAM and member of the CRC 1182. “On the one hand, it was shown that these polyps remained smaller by a third in comparison. On the other hand, we observed above all serious effects on the asexual reproduction of the animals, which can come to a complete halt without the presence of a microbiome”, says Weiland-Bräuer, who is also active in the priority research area “Kiel Marine Science” (KMS) at Kiel University.

Moon jellyfish go through a complex sequence of several life stages, in which they successively change from a stationary way of life – the polyp – attached to the sea floor to a stage floating freely in the water as adult medusae. The presence of a natural microbiome is thus apparently a prerequisite for the undisturbed course of this process. If the polyps lacked microbial colonization in the experiment, this life cycle finally came to a complete halt at one point: The release of the first stage living freely in the water – the ephyrae – is prevented under sterile conditions. The researchers were able to show that this interruption was not an effect of the antibiotics by means of a recolonization experiment: if they reestablished the characteristic microbial species on the sterilized polyps, the normal reproduction process was restored.

In further experiments, the scientists also investigated a possible connection between the natural microbiome and the defense against pathogens. It turned out that the germ-free polyps were hardly able to fend off harmful organisms. “The presence of the natural microbiome made the polyps more tolerant of pathogens and they were able to survive and reproduce in their presence,” first author Weiland-Bräuer summarizes. The Kiel researchers concluded that the microbiome apparently also has a protective function in the jellyfish. Similar to the way microorganisms are involved in the immune defense of higher organisms, they may also take on the task of a protective shield in jellyfish, which only consist of two layers of tissue, to prevent the organism from being attacked by pathogens.

Relevance of a simple model organism

So-called model organisms play an important role in the investigation of possible causal relationships in the interactions between microbiomes and host organisms. These usually simply organized organisms help to identify possible regularities that remain hidden in higher organisms, including humans, due to the much greater complexity of the interactions between microbes and host cells. While the moon jellyfish has been used for a long time to study physiological and ecological aspects of marine life, researchers have only been using it as a model organism in microbiome research for a few years. “In general, Aurelia aurita is excellently suited as a model to study the effects of the microbiome on the health and fitness of marine organisms”, emphasizes Schmitz-Streit, head of the Molecular Biology of Microorganisms group at the IfAM and two subprojects within the CRC 1182. “New insights into the role of the microbiome in the reproduction of these simply organized marine animals are also of great importance, especially for understanding changes in the marine environment”, Schmitz-Streit continues.

This can be seen, for example, in so-called jellyfish blooms – the massive, rapid and strong occurrence of certain jellyfish species in various marine regions, the causes of which researchers suspect to be changes in marine living conditions caused by climate change. These blooms have a significant influence on the composition and structure of ecological communities. For example, they reduce the availability of food in marine ecosystems and thus have a negative impact on fish stocks, among other things. In the Baltic Sea, for example, the moon jellyfish is to a certain extent an indicator that makes such changes clearly visible. A better understanding of the microbial influences on the life cycle and reproduction of these animals could help in the future to learn more about the connections between changes in the marine environment and the strong reproduction of jellyfish.

https://www.uni-kiel.de/de/pressemitteilungen/2020/297-weiland-ephyrae.jpg
Caption: Comparison of germ-free (bottom row) and natural epyhrae: The external appearance shows that jellyfish without a natural microbiome are affected in their fitness.
© Dr. Nancy Weiland-Bräuer

https://www.uni-kiel.de/de/pressemitteilungen/2020/297-weiland-author.jpg
Caption. Dr. Nancy Weiland-Bräuer researches the importance of the natural microbiome for the healthy functioning and reproduction of simple marine organisms.
© IfAM

https://www.uni-kiel.de/de/pressemitteilungen/2020/297-weiland-team.jpg
Caption: Prof. Ruth Schmitz-Streit (in the background) and Dr Nancy Weiland-Bräuer are investigating jellyfish as a model organism in microbiome research as part of the CRC1182.
© IfAM

https://www.uni-kiel.de/de/pressemitteilungen/2020/297-weiland-team-aurelia.jpg
Caption: In the Baltic Sea, moon jellyfish serve as an indicator of changes in the marine environment. © Hans Hillewaert via Wikimedia Commons, CC BY-SA 4.0