Journal of Biological Chemistry: If oxygen becomes the undoing of proteins 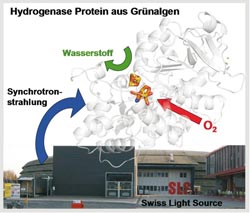 Synchrotron radiation source: The researchers from Bochum and Berlin investigated the hydrogenase protein using the Swiss Light Source at the Paul Scheerer Institute near Zurich. The figure also shows the 3-D structure of the protein. Photo: Camilla Lambertz<br>

Scientists from the Faculty of Biology and Biotechnology at the RUB have published a report in the Journal of Biological Chemistry explaining why enzymes used for the production of hydrogen are so sensitive to oxygen.

In collaboration with researchers from Berlin, they used spectroscopic methods to investigate the time course of the processes that lead to the inactivation of the enzyme’s iron center. “Such enzymes, the so-called hydrogenases, could be extremely significant for the production of hydrogen with the help of biological or chemical catalysts”, explains Camilla Lambertz from the RUB study group for photobiotechnology. “Their extreme sensitivity to oxygen is however a major problem. In future, our results could help to develop enzymes that are more robust.”

Oxygen as a friend and as an enemy

Oxygen is crucial for the survival of most animals and plants. It is however toxic for many living creatures if the concentration thereof is too high, and some organisms can even only exist entirely without oxygen. Sensitivity to oxygen is also present at the protein level. A large number of enzymes, for example, hydrogenases are known to be irreversibly destroyed by oxygen. Hydrogenases are biological catalysts that convert protons and electrons into technically usable hydrogen. The RUB team of Prof. Thomas Happe is doing research on so-called [FeFe]-hydrogenases which are capable of producing particularly large amounts of hydrogen. The generation of hydrogen takes place at the H-cluster, consisting of a di-iron and four-iron subcluster which, together with other ligands, form the reactive center.

The researchers, working in collaboration with Dr. Michael Haumann’s team in Berlin, discovered that oxygen binds to the di-iron center of the hydrogenase, which initiates the inactivation of another part of the enzyme consisting of four further iron atoms. In this project, sponsored by the BMBF, it was possible to show the diverse phases of the inactivation process for the first time using the so-called X-ray absorption spectroscopy. The researchers used the synchroton radiation source Swiss Light Source in Switzerland for this specific type of measurement. It generates particularly strong rays, thus enabling the characterization of metal centers in proteins. Amongst other things, the scientists thus determined the chemical nature of the iron centers and the distance from the surrounding atoms using atomic resolution.

The team of researchers from Bochum and Berlin used a new experimental procedure. They initially brought the hydrogenase sample into contact with oxygen for a few seconds to minutes and finally for a couple of hours and then suppressed all proceeding reactions by deep-freezing it in liquid nitrogen. The subsequently gained spectroscopic data was used for the development of a model for a three-phase inactivation process. According to this model, an oxygen molecule initially binds to the di-iron center of the hydrogenase, which leads to the development of an aggressive oxygen species. In the subsequent phase, this attacks and modifies the four-iron center. During the final phase, further oxygen molecules bind and the entire complex disintegrates. ”The entire process thus consists of a number of consecutive reactions that are distinctly separated in time”, says Lambertz. “The velocity of the entire process is possibly dependent on the phase during which the aggressive oxygen species moves from the di-iron to the four-iron center. We are currently elaborating further experiments to investigate this.”