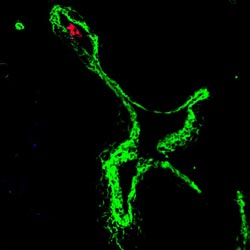 Fluorescence image showing a neutrophil (in red) going out of the blood vessel (in green) into a tumour. These immune cells facilitate tumour vessel growth.<br><br>HZI/Jablonska-Koch<br>

Formation of Interferon-beta (IFN-β) is increased in infections and cancer diseases. Consequently, it is often administered therapeutically. Amongst other things, it prevents formation of new blood vessels within a tumour, thus inhibiting its growth.

Scientists at the Helmholtz Centre for Infection Research (HZI) have now discovered that IFN-β does so by impeding the communication between cancer tissue and immune cells. Their findings, published in the scientific magazine “International Journal of Cancer”, help to understand how this “jamming” can be used therapeutically.

Just like healthy cells, tumour cells need nutrients and oxygen in order to survive. For this reason, a tumour of a certain size has to ensure that it is connected to the blood circulation. In doing this, it is supported by cells of the innate immune system, the neutrophil granulocytes or brief neutrophils, which are supposed to protect the body against pathogens.

Neutrophils normally circulate in the blood until—attracted by so-called chemokines—they enter the tissue where they ingest and destroy intruding pathogens. In addition, these cells are able to trigger the formation of blood vessels. Presumably, this is how they help to repair tissue which has been destroyed by inflammation. However, neutrophils are also able to enter cancer tissue and contribute to its connection to the blood supply. This is probably the reason why detection of numerous neutrophils in a tumour is a sign of unfavourable patient prognosis.

IFN-β is used as a treatment for some tumours such as melanomas and leukaemia. Scientists at the HZI in Braunschweig had shown recently that this messenger molecule can interfere with cancer growth by inhibiting the formation of new blood vessels. However, the way it does so remained a puzzle.

Now, researchers have succeeded in revealing the effect of IFN-β on migration of pro-tumour neutrophils. “We wanted to understand why IFN-β prevents the neutrophils from entering the tumour,” says Dr Jadwiga Jablonska-Koch, scientist in the “Molecular Immunology” department at the HZI. “This would be the way for physicians to improve existing therapies and choose appropriate treatment for the individual patient.”

To this end, the scientists followed the interaction between the cells. Messenger molecules such as chemokines are a means of communication frequently used for this purpose. They are produced by cells and bind to correspondingly shaped surface receptors. In the case of neutrophils, this is the receptor called CXCR2. It binds the chemokines CXCL1, CXCL2 and CXCL5. “We have seen that the concentration of the chemokines in the bone marrow, where the neutrophils originate, is low,” says Dr Siegfried Weiss, head of the department in which Jablonska-Koch works. “On the other hand, we find a high concentration in the tumour, which attracts the neutrophils.” Neutrophils migrate along the chemokine gradient into the tumour and once there, they themselves release the same chemokines in order to attract other neutrophils to obtain more support.

IFN-β interferes with this communication: it makes the cells in the tumour produce fewer chemokines and no chemokine gradient is formed. “That way, fewer neutrophils enter the cancer tissue and fewer new blood vessels are formed,” says Jablonska-Koch. “The tumour is not effectively connected to the vital blood supply and cannot grow efficiently.” For that reason it is of therapeutical benefit to administer IFN-β additionally. “We now better understand why IFN-β helps in some cancers and that it is an important part of the body’s own system for combating tumours,” says Weiss. Their findings could help physicians to assess which patients might profit from administering IFN-β and when neutrophils ought to be an objective of cancer therapy.

Original publication
Jadwiga Jablonska, Ching-Fang Wu, Lisa Andzinski, Sara Leschner, Siegfried Weiß
CXCR2-mediated tumor associated neutrophil recruitment is regulated by IFN-β
International Journal of Cancer, 2013 DOI 10.1002/ijc.28551
The focus of HZI's Molecular Immunology Department is to investigate the role of signaling molecules used by the immune system. One of the primary research goals is to determine how immune cells communicate with each other during an infection and which messenger substances they use for this purpose.
The Helmholtz Centre for Infection Research (HZI)
Scientists at the Helmholtz Centre for Infection Research in Braunschweig, Germany, are engaged in the study of different mechanisms of infection and of the body’s response to infection. Helping to improve the scientific community’s understanding of a given bacterium’s or virus’ pathogenicity is key to developing effective new treatments and vaccines.