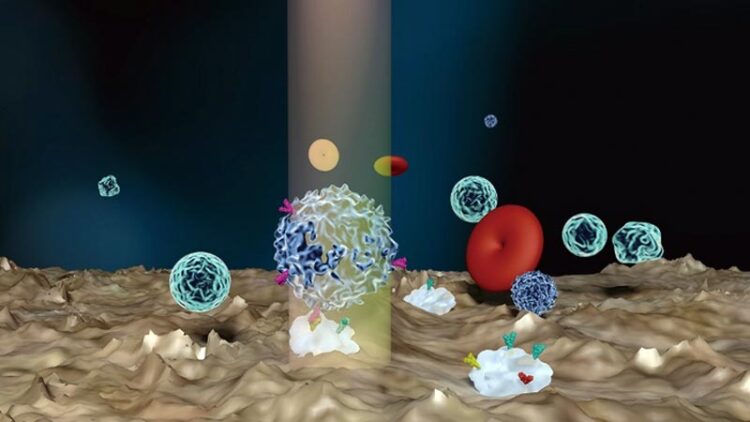 … could help our understanding of diseases.

The ligand-receptor binding is important for biological processes such as immunity and infectious disease. For example, the leukocyte can enter injured tissue by binding to the P selectin on the endothelial cells. COVID-19 is caused by the binding between viral spikes and angiotensin-converting enzyme 2 (ACE2) on the host cells. Single-cell assays of different types have been developed to study the binding or adhesion kinetics.

However, the difference in measured binds between P selectin and ACE2 across methods is significant. It arises from the measured samples having different lengths of interacting molecules, linker molecules, or the scheme of molecular immobilization. That affects bond dissociation kinetics. Existing methods measure the tensile force along the normal direction of the cell interface based on rupturing the adhesive contact. These methods are far from the actual in vivo cell adhesion condition.

In vivo cell adhesion is more complex than what existing methods can measure. Initially, a cell will pre-attach in an inclined direction. The cell will then experience fluid-flow-induced shear force, enabling the receptor and ligand to slide against each other. The sliding promotes the formation of new interactions after the pre-existing attachment ruptures. The force direction between ligand and receptor is tangential to the cell or parallel to the substrate, leading to different cell adhesion behavior.

Preliminary studies showed that integrins require lateral force to mediate cell-cell interactions. T-cell receptors can generate tangential force at the contact interface. Microfluidic chambers have been adapted to study this condition with the pump-controlled shear flow.

The flow chamber assays, using current techniques, cannot precisely control the cell-substrate distance. They also cannot target a specific cell due to the flow’s random distribution of cells. It can only analyze the adhesion kinetics of a fraction of cells that randomly undergo rolling processes under the microfluidic flow. There is no control of the adhesion measurement time with the flow chamber assay. This time is usually equivalent to the period from the cell contacting the chamber wall to the cell forming the initial bonding with the wall, limiting the precision of the cell adhesion analysis.

In a new paper published in eLight, a team of scientists led by Associate Professor Yuebing Zheng of the University of Texas at Austin studied the control of cell surface receptors (Fig.1). Their paper, titled “Light-driven single-cell rotational adhesion frequency assay,” has demonstrated a unique technique that could dramatically change science’s approach to this field.

It enabled label-free and sub-cellular-resolution quantification of adhesion of almost any targeted individual cells in clinical solutions. The team’s scRAFA measured the adhesion forces of cells that undergo light-driven out-of-plane rotation near the substrate. Their approach is significantly different from the traditional approach of measuring the adhesion kinetics through rupturing the adhesive contact in the normal direction,

The researchers target specific cells through a seamless fusion of optical rotation and trapping on a single platform. It allowed the team to continuously monitor the complete cell adhesion process, from initiating the bonding with the substrate to forming the permanent attachment (Fig.2). They could also precisely control the interaction distance between the substrate ligands and cell receptors for measuring the lateral adhesion kinetics for the first time. As such, scRAFA enables in situ high-precision measurements of the shear adhesion forces on targeted cells in complex clinical samples.

Light-driven scRAFA has a range of capabilities integrated within a single system, including optical trapping, rotation, imaging, and spectroscopy. Their scRAFA can pinpoint targeted organisms in complex fluids for the adhesion measurement. It can also identify additional optical characterizations of the organisms’ structures and other functions. This functionality simplifies the establishment of full structure-function relations at the single-organism level.

ved rotational adhesion and shear force measurements for cells with both homogeneous and heterogeneous surfaces. The capability of revealing single-cell structural and functional heterogeneity is crucial to studying cellular microdomain, clustering, and tether. Their adhesion analysis is also instrumental in understanding immune response and bacterial infection.

Most importantly, their scRAFA can be applied to organisms under different physiological conditions (Fig.3). It can even reveal the shear force-dependent adhesion behaviors due to the laser power’s tunable fluidic flow and rotation torque. The initial study showed that their scRAFA could distinguish adhesion behaviors between cultured yeast cells and those in clinical samples.

The broader applications of the scRAFA will require further modeling of the organisms and their interactions with substrates. With its superior performance and general applicability, scRAFA could play a critical role in fields from cell biology to immunotherapy to urinary tract infection.

Yuebing Zheng
The University of Texas at Austin,United States
zheng@austin.utexas.edu