Home / Life Sciences / In living color: Brightly-colored bacteria could be used to 'grow' paints and coatings
20.02.2018

In living color: Brightly-colored bacteria could be used to 'grow' paints and coatings 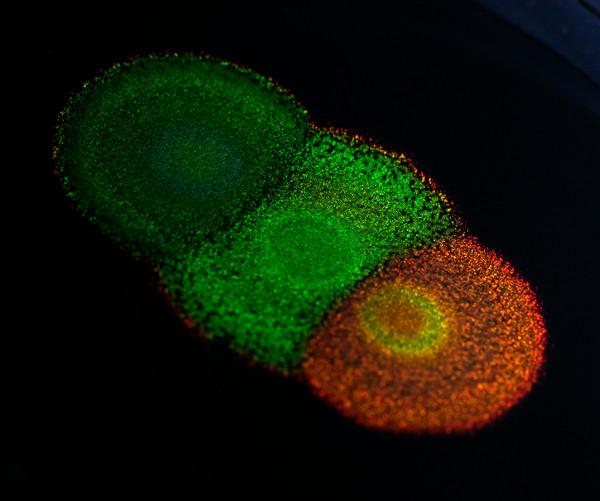 The image shows a colony of the Flavobacterium IR1, 2 cm in diameter, growing on a nutrient agar plate. The cells in the colony are highly organised, thus forming a 2-D photonic crystal that interferes with light. This results in structurally coloured bright and angle-specific hues with a concentric ring pattern indicating subtle changes in organisation. The older cells of IR1 in the colony centre are more disorganised and therefore loses colour. IR1 can be genetically modified from this wild-type strain to create new, living photonic structures. Credit: University of Cambridge

The study is a collaboration between the University of Cambridge and Dutch company Hoekmine BV and shows how genetics can change the colour, and appearance, of certain types of brightly-coloured bacteria. The results open up the possibility of harvesting these bacteria for the large-scale manufacturing of nanostructured materials: biodegradable, non-toxic paints could be 'grown' and not made, for example.

Flavobacterium is a type of bacteria that packs together in colonies that produce striking metallic colours, which come not from pigments, but from their internal structure, which reflects light at certain wavelengths. Scientists are still puzzled as to how these intricate structures are genetically engineered by nature, however.

“It is crucial to map the genes responsible for the structural colouration for further understanding of how nanostructures are engineered in nature,” said first author Villads Egede Johansen, from Cambridge's Department of Chemistry. “This is the first systematic study of the genes underpinning structural colours — not only in bacteria, but in any living system.”

The researchers compared the genetic information to optical properties and anatomy of wild-type and mutated bacterial colonies to understand how genes regulate the colour of the colony.

“We mapped several genes with previously unknown functions and we correlated them to the colonies' self-organisational capacity and their colouration,” said senior author Dr Colin Ingham, CEO of Hoekmine BV.

“From an applied perspective, this bacterial system allows us to achieve tuneable living photonic structures that can be reproduced in abundance, avoiding traditional nanofabrication methods,” said co-senior author Dr Silvia Vignolini from the Cambridge's Department of Chemistry.

“We see a potential in the use of such bacterial colonies as photonic pigments that can be readily optimised for changing colouration under external stimuli and that can interface with other living tissues, thereby adapting to variable environments. The future is open for biodegradable paints on our cars and walls — simply by growing exactly the colour and appearance we want!”