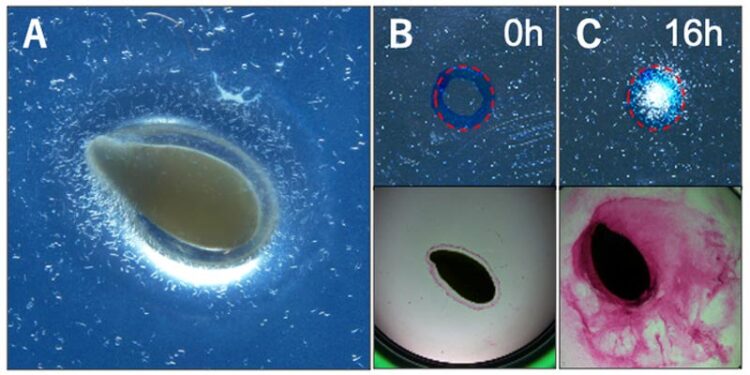 A: Nematodes attracted to a flaxseed BC: (Top) Nematode attraction tests using seed exudate from 0 (B) and 16 (C) hours of imbibition. After imbibing for 16 hours, nematode attraction activity (white colony) was observed. BC: (Bottom) Staining test of seed cell wall components after 0 (B) and 16 (C) hours of imbibition. A large amount of cell wall components is released after 16 hours of imbibition.
Credit: Fig. 1 from (Tsai, A., et. al., Science Advances, 2021) under CC BY-NC 4.0 (https://creativecommons.org/licenses/by-nc/4.0/legalcode) / Edited: These images are parts of the original image selected for this press release.

A research collaboration based in Kumamoto University, Japan has become the first to successfully purify and identify an attractant for crop-infecting root-knot nematodes from flaxseeds. Their experiments revealed that rhamnogalacturonan-I (RG-I), a flaxseed cell wall component, can attract root-knot nematodes. The linkages between rhamnose and L-galactose are essential for the attraction.

Plant-parasitic nematodes are one of many known agricultural pests. They are parasites that infect plant roots and form feeding sites known as “root knots” to reproduce. Heavily-infested plants fail to absorb water and inorganic salts efficiently, which results in growth retardation or even death. Agricultural damage caused by nematodes has caused major concerns worldwide. The level of nematode-associated agricultural damage has been estimated to be several hundreds of billions of US dollars per year worldwide.

Many attempts have been made to identify nematode attractants released by host plants without success. One of the reasons seems to be the inability to collect large quantities of root exudates to purify sufficient amounts of attractants for identification. Furthermore, the lack of large-scale nematode cultivation methods also limits the ability to perform attractant-screening assays.

The research group examined the purified attractant and found that it consists of cell wall polysaccharides. Its structure was found to resemble rhamnogalacturonan-I with alternating rhamnose and galacturonic acid residues as the backbone, and galactose and fucose monomers as sidechains that decorate the RG backbone.

Further investigation revealed that the L-galactose sidechains are critical for nematode attraction. Interestingly, while D-galactose is commonly found in plant cell walls, L-galactose is comparatively rare, with flax seeds being an exceptionally good source. The researchers believe that the nematodes’ unique preference toward L-galactose suggests that they possess a sophisticated recognition mechanism capable of distinguishing small molecular differences of the attractant molecules. Researchers further confirmed that synthetic rhamnose-linked-L-galactose disaccharide is sufficient to attract nematodes. These sugars are likely not utilized as a source of nutrients for the nematodes, but strictly as an attractant.

“Using the nematode attractant discovered in our study, we are now one step closer to developing a functional nematode-trapping device,” said Professor Shinichiro Sawa, who led the study. “Since this attractant is a natural plant product and does not contain nematocidal agents, it may be able to bypass the pesticide registration process. Additionally, we believe that the nematode attractant from this research is unlikely to negatively impact the environment or human health, and has the potential to contribute to sustainable and environmentally-friendly agriculture. We look forward to our work inspiring novel innovations to the agricultural sector.”