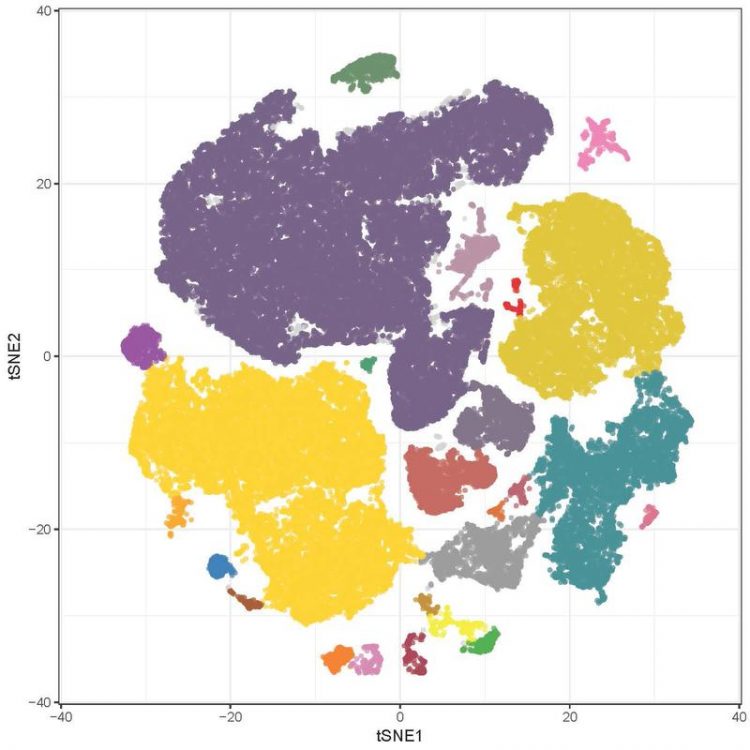 Clusters of MAIT cells in human blood and colon biopsies. Subpopulations of these defense cells group into colored "continents" according to the markers expressed by the cells. Department of Biomedicine, Tobias Rutishauser

It is known that the metabolites of bacteria influence the composition and function of immune cells resident within the gut. These defense cells include MAIT cells (mucosal-associated invariant T cells), which were only recently discovered and are naturally abundant in the gastrointestinal mucosa, skin liver, and blood. These cells are specialized in recognizing the microorganisms living in every human being and monitoring their activities.

Different populations in gut vs. blood

A group led by Prof. Dr. Gennaro De Libero from the University of Basel and PD Dr. Petr Hruz from the University Hospital of Basel have investigated how MAIT cell activation and function is influenced by bacterial metabolites produced in normal colon. The study revealed that distinct populations of MAIT cells are located in the human intestinal mucosa. These populations were identified in gut biopsies using highly innovative methods and bioinformatics analyses.

Result: MAIT cells are present in variable states of alert and rest, in accordance with the metabolic state of intestinal bacterial flora. The defense cells are most frequently stimulated by bacteria grown under low-oxygen and slow growth-phase – conditions such as those found in the large intestine. MAIT cells can then directly influence local inflammation but also tissue healing and cell fitness in the gut by producing different messenger substances.

“Our results show that there is a fine balance occurring in the gut between microbial growth conditions, the production of stimulating metabolites and the response of MAIT defense cells,” state the researchers. The metabolism of microbes in the intestine constantly adapts to changing host conditions. By detecting the metabolic state of enteric bacteria, MAIT cells can potentiate their function in mucosal immunosurveillance.