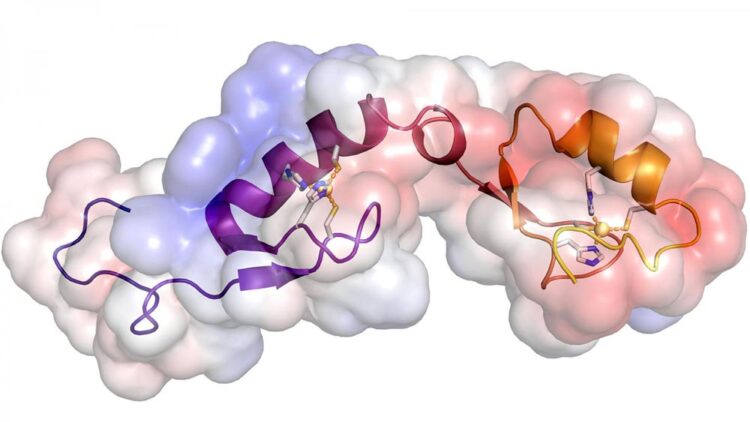 This is a structure of the Asterix/Gtsf1 protein. Asterix/Gtsf1 helps immobilize so-called "jumping genes" in germ cells, a type of cell important for sexual reproduction. CSHL Professor & HHMI Investigator Leemor Joshua-Tor and a research investigator in her lab, Jonathan Ipsaro, used two different biophysical techniques, cryo-EM and NMR, to develop their model. In this NMR structure, the purple helix binds to a tRNA, a special class of RNA, which is speculated to escort it to a jumping gene. The blue surface of the protein is positively charged, which helps it bind to negatively charged RNA molecules. The red area on the right is negatively charged.
Credit: Ipsaro/Joshua-Tor lab, CSHL/2021

Short pieces of DNA–jumping genes–can bounce from one place to another in our genomes. When too many DNA fragments move around, cancer, infertility, and other problems can arise. Cold Spring Harbor Laboratory (CSHL) Professor & HHMI Investigator Leemor Joshua-Tor and a research investigator in her lab, Jonathan Ipsaro, study how cells safeguard the genome’s integrity and immobilize these restless bits of DNA. They found that one of the jumping genes’ most needed resources may also be their greatest vulnerability.

The mammalian genome is full of genetic elements that have the potential to move from place to place. One type is an LTR retrotransposon (LTR). In normal cells, these elements don’t move much. But if something happens to allow them to move, say during sexual reproduction or in cancerous cells Joshua-Tor says:

“Sometimes they jump into very important spots, either genes themselves or in areas of the genome that is important for regulating genes.”

In this study, Joshua-Tor and Ipsaro examined a mouse protein called Asterix/Gtsf1 that immobilizes LTRs. To understand how this protein locks down LTRs, Ipsaro used several techniques, including cryo-EM, to take a closer look at the protein structure. Joshua-Tor says:

“Structure just informs us in many ways, like how things work. If you can see something, you have a way better idea of how it works.”

Ipsaro found Asterix/Gtsf1 binds directly to a particular class of RNA called transfer RNA (tRNA). tRNAs normally are part of the cell’s protein manufacturing machinery. LTRs have borrowed that part of the protein-making machinery to replicate their genetic material. Asterix/Gtsf1 overrides what the LTRs are trying to do by freezing the otherwise mobile element in place, shutting down their ability to move. Ipsaro says:

“It’s trying to copy and paste itself all over the genome. A part of it evolutionarily has depended on tRNA binding in order to replicate.”

Instead of freezing the entire genome, scientists think Asterix/Gtf1 is using tRNAs to suppress small specific regions, like LTRs. Researchers are trying to figure out how cells protect themselves against these and other types of mobile genetic elements. They hope that someday they might tame an overly restless genome, preventing new mutations in the germline and in tumors.