Home / Life Sciences and Chemistry / How the Brain Learns to Distinguish Between What Is Important and What Is not
17.06.2015 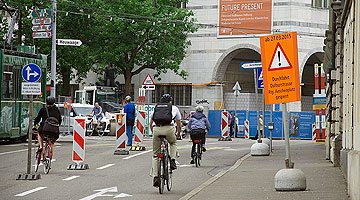 Overwhelmed in the traffic: filtering visual information in the brain. (Image: University of Basel, Biozentrum)

In a recently published study in “Neuron”, the neuroscientist and her team show that learning the relevance of images considerably modifies neuronal networks in the brain. These changes might help our brain to process and classify the overload of stimuli in our environment more effectively.

How we perceive our environment greatly depends on what we have previously seen and learnt. For example, expert drivers do not need to think twice about the meaning of different road signs and are experienced in assessing traffic situations.

They can filter out relevant information from a flood of other irrelevant stimuli and thus react quickly. In contrast, beginners need much longer to process the new information. Prof. Sonja Hofer’s team at the Biozentrum of the University of Basel and University College London addressed the question of how processing of sensory stimuli is optimized in the brain through learning.

The brain learns to discriminate between images

To do this, Prof. Hofer’s team investigated the visual cortex of mice. This part of the brain is responsible for the processing and perception of visual stimuli. Mice ran through a virtual-reality environment where they encountered various images, one of which was paired with a reward. Within one week, the animals had learnt to discriminate between the images and to respond accordingly.

This learning was reflected in the activity of nerve cells in the visual cortex whose responses were recorded and tracked over the course of learning. While the responses in the brain to the relevant visual stimuli were quite unspecific in beginner mice, many more neurons reacted specifically to the shown images after one week of training.

“From day to day, the response of the neurons to the images became increasingly distinguishable and reliable”, says Adil Khan, one of the two first authors. He speculates that such changes in the brain might also allow us to process important information from our environment more efficiently, and perhaps underlies our ability to react promptly to important visual stimuli.

The scientists also demonstrated that diverse internal and external signals affect the processing of the visual stimuli. “We observed that the response of the nerve cells to the same visual stimuli became less accurate when the mice where engaged in another task, such as having to discriminate between different smells. The visual stimuli then lose their relevance and are no longer so effectively analyzed by the brain”, says Khan.

“Remarkably, the expectation of a stimulus even before it appears, and the anticipation of a reward also altered the activity of specific brain cells. This means that from one moment to the next our brain might process the same stimulus quite differently depending on its importance and relevance.”

Traditionally it was thought that the visual cortex exclusively processes visual information. This study, however, corroborates that during learning also many other signals from various brain regions influence activity in this brain area. “This means that our previously learnt knowledge, our expectations and the context we are in can have a great impact on our visual perception of the environment”, explains Hofer.