How proteins change shape inside cells 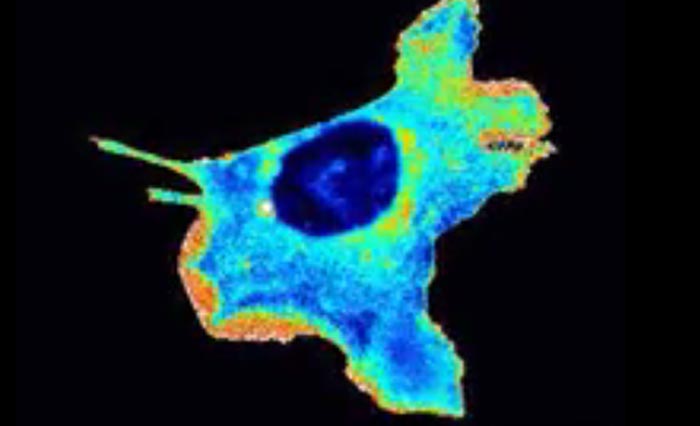 Individual molecules followed within live cells. When they change color, they have adopted a new conformation, something Scientists could not previously see or study.
Credit: Hahn/Elston, UNC School of Medicine

This new method from UNC School of Medicine researvchers Klaus Hahn and Tim Elston, has the potential to super-charge the study of human proteins as they interact and change their conformations in fundamentally important ways in human health and disease.

Understanding how proteins bend, twist, and shape-shift as they go about their work in cells is enormously important for understanding normal biology and diseases. But a deep understanding of protein dynamics has generally been elusive due to the lack of good imaging methods of proteins at work. Now, for the first time, scientists at the UNC School of Medicine have invented a method that could enable this field to take a great leap forward.

The scientists’ new “binder-tag” technique, described in a paper in Cell, allows researchers to pinpoint and track proteins that are in a desired shape or “conformation,” and to do so in real time inside living cells. The scientists demonstrated the technique in, essentially, movies that track the active version of an important signaling protein – a molecule, in this case, important for cell growth.

“No one has been able to develop a method that can do, in such a generalizable way, what this method does. So I think it could have a very big impact,” said study co-senior author Klaus Hahn, PhD, the Ronald G. Thurman Distinguished Professor of Pharmacology, and director of the UNC-Olympus Imaging Center, at UNC School of Medicine.

The work was a collaboration between Hahn’s laboratory and the laboratory of imaging analysis expert Timothy Elston, PhD, professor of pharmacology and co-director of the Computational Medicine Program at the UNC School of Medicine.

The new method, like all biological imaging techniques, addresses the fundamental problem that many of the molecules at work in living cells cannot be visualized directly and precisely with an ordinary light microscope. Down at the scales where proteins operate, light flows in enormous waves that bend around things and cannot render objects sharply.

One approach to this problem, especially when proteins need to be imaged in their normal live-cell habitats, has been to tag the targeted proteins with fluorescent beacons, so that at least the beacons’ light emissions can be seen and captured directly with microscopy – for example to map the places where a particular protein works in a cell. A technique called FRET (Förster resonant energy transfer), which relies upon exotic quantum effects, embeds pairs of such beacons in target proteins in such a way that their light changes as the protein’s conformation changes. This allows some study of protein dynamics as they shape-shift inside cells. But FRET and other existing methods have limitations, such as weak fluorescent signals, that greatly limit their utility.

The new binder-tag method starts with the insertion of a tiny molecular “tag” within a protein being studied, and the use of a separate molecule that binds to the tag only when the tag-containing protein takes a certain shape or conformation, such as when the protein is active to help a cell perform a particular function. Placing appropriate fluorescent beacons within the binder and/or the tag molecule effectively allows a researcher to image, over time, the precise locations of tagged proteins that are in a particular conformation of interest.

The method is compatible with a wide range of beacons, including much more efficient ones than the interacting beacon pairs required for ordinary FRET. Binder-tag can even be used to build FRET sensors more easily, Hahn said. Moreover, the binder-tag molecules were chosen so that nothing in cells can react with them and interfere with their imaging role.

The net result, according to Hahn, is a robust technique that in principle can handle a broad variety of protein-dynamics studies previously out of reach, including studies of proteins only sparsely present in cells.

In the Cell paper, Hahn and colleagues discuss several proof-of-principle demonstrations. They used the new method to image an important growth-signaling protein called Src to reveal, in unprecedented detail, how it forms tiny islands of activity. This, in turn, enabled the researchers to analyze factors affecting the protein’s biological roles.

“With this method we can see, for example, how microenvironmental differences across a cell affect, often profoundly, what a protein is doing,” Hahn said.

Now the researchers are using the technique to map the dynamics of other important proteins. They are also doing further demonstrations to show how binder-tag can be tailored to capture the dynamics of very diverse protein structures and functions, not just proteins that work like Src.

The scientists envision that binder-tag ultimately will become a basic enabling technique for studying normal proteins, larger multi-molecular structures in cells, and even the dysfunctional proteins associated with diseases such as Alzheimer’s.

“For a lot of protein-related diseases, scientists haven’t been able to understand why proteins start to do the wrong thing,” Hahn said. “The tools for obtaining that understanding just haven’t been available.”