How our cellular antennas are formed 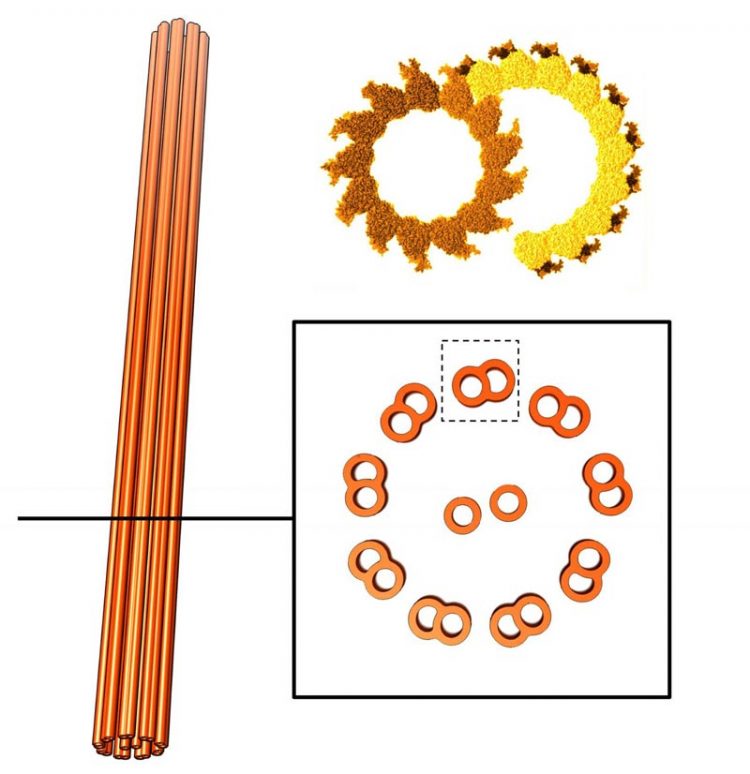 This is a model of the human cilium frame (left), whose cross-section shows the nine microtubule doublets (bottom right); the dotted frame surrounds a doublet. Top right: atomic model of a doublet formed in vitro. Credit: © UNIGE

Most of our cells contain an immobile primary cilium, an antenna used to transfer information from the surrounding environment. Some cells also have many mobile cilia that are used to generate movement.

The 'skeleton' of the cilium consists of microtubule doublets, which are 'pairs' of proteins essential for their formation and function. Defects in the assembly or functioning of the cilia can cause various pathologies called ciliopathies.

Scientists from the University of Geneva (UNIGE), Switzerland, have developed an in vitro system capable of forming microtubule doublets, and have uncovered the mechanism and dynamics of their assembly.

Their study, published in the journal Science, reveals the crucial role of tubulin, a real building block, in preventing the uncontrolled formation of ciliary structures. This method will make it possible to discover and exploit possible differences between the cilia of human cells and those of pathogens, allowing for the development of new treatments.

The cells sense many light, mechanochemical or biological signals thanks to an immobile primary cilium. Many mobile cilia, called flagella, may also be present on some cells.

They are able to produce a movement, such as the moving of an embryo from the fallopian tube to the uterus, the evacuation of mucus into the airways, or the swimming of the spermatozoids.

Defects in the assembly or function of cilia can lead to ciliopathies, a group of diseases including brain malformations, retinal or fertility disorders, kidney or liver diseases, recurrent respiratory infections and skeletal anomalies.

Mounting a scaffold in a test tube

At the base of the cilium are two centrioles, organelles formed by microtubules, which are components of the cytoskeleton. The centriole is the starting point for the construction of the cilium, which will consist of nine doublets of microtubules.

“The doublet is a structure essential for the formation and functions of cilia, but its assembly was unknown until now”, explains Paul Guichard, Professor at the Department of Cell Biology of the UNIGE Faculty of Science.

The group of Paul Guichard and Virginie Hamel, co-head of the laboratory, has developed an in vitro system capable of forming doublets of microtubules. The researchers also used advanced microscopy and modeling techniques, in collaboration with researchers from the Institut Curie d'Orsay in France and the Prague Institute of Biotechnology in the Czech Republic.

At first, nine microtubules are formed from the centriole through the assembly of “bricks” of tubulin. A doublet then forms on the surface of each microtubule.

By filming this phenomenon using state-of-the-art microscopes, the researchers also showed for the first time that the second microtubule is assembled in two opposite directions by adding tubulin bricks.

Inhibit the movement of parasites

The axis of the cilium or flagellum also serves as a “rail” for the movement of “trains” of molecules from one end of the organelle to the other, propelled by real molecular motors.

These transports are necessary for all the functions of the organelle. “We now intend to discover if there are any differences in the assembly and functioning of cilia or flagella of certain parasites, such as malaria, compared to their human counterparts. Such differences could thus become the target of treatments that would only affect the pathogens”, concludes Paul Guichard.