Home / Life Sciences and Chemistry / How Nature splits water and powers the planet
08.08.2019

How Nature splits water and powers the planet 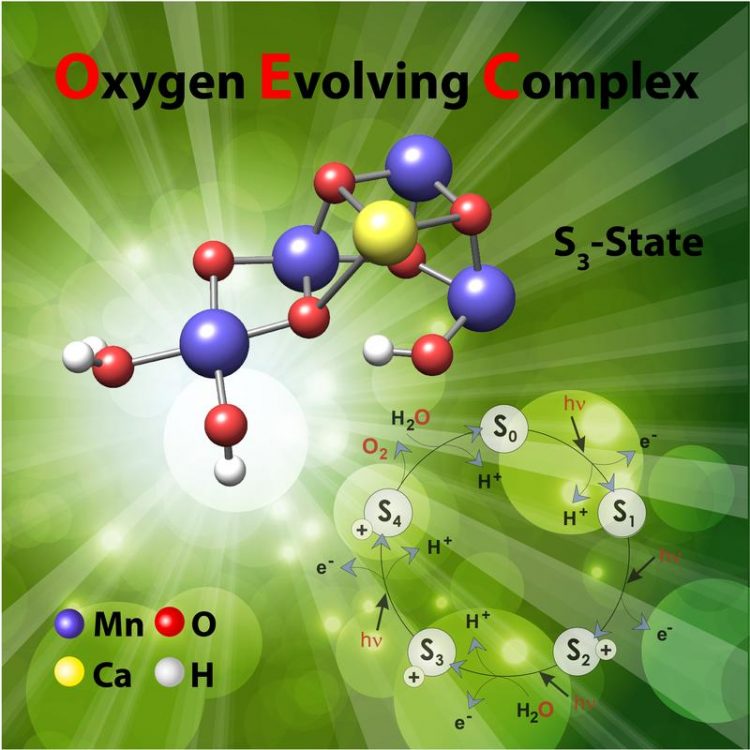 The study reveals how the cofactor is activated, a process that involves the highly regulated uptake of water from its surroundings. (c) MPICEC

The splitting of two water molecules into oxygen using sunlight is the first step of photosynthesis, a process performed by plants and cyanobacteria. The overall reaction operates much the same way as a roof-top solar panel, harvesting light energy from the sun.

But instead of generating electricity, the energy is used to produce chemical compounds like carbohydrates, the food animals and humans consume. It has also created the oxygen rich atmosphere of our planet, and the protective ozone layer, which shields the surface from harmful UV radiation.

The study, led by Dr. Nick Cox, a former group leader of MPI CEC in the Department of Prof. Wolfgang Lubitz, now at ANU Research School of Chemistry, focused on the photosynthetic enzyme which performs biological water splitting, Photosystem II. Buried within this large protein complex is a cofactor consisting of four manganese and one calcium metal ions.

It is this cofactor that performs the water splitting reaction, binding the two waters in close proximity to allow them to join together to form a single oxygen molecule. The study reveals how the cofactor is activated, a process that involves the highly regulated uptake of water from its surroundings.

“The study reveals how the enzyme needs to ‘breathe’ to allow water access,” says Dr. Cox. “Half-way through its reaction cycle the enzyme develops the ability to stretch like a concertina. This motion rearranges the atoms that link the manganese centres allowing a single water molecule to bind to the cofactor.”

Importantly, this molecular motion is not accessible at other times during the reaction cycle, preventing water uptake to occur. This then directs the reaction to form a single product, molecular oxygen.

“Without the careful, sequential binding and processing of the two substrate waters, reactive oxygen species can potentially be formed and released which would destroy the whole enzyme,” says MPI CEC researcher Dr. Maria Chrysina.

If human beings could perform the same reaction using cheap materials as nature does, society would have a limitless renewable source of energy.

“Enough sunlight hits the earth in a single hour to power all human activity for about one year,” says Prof. Wolfgang Lubitz, director emeritus at MPI CEC.

The development of artificial water splitting enzymes would provide a means via which society could synthesize ‘solar fuels’, green alternatives to petroleum and natural gas, generated from sunlight and abundant materials such as water.

Hydrogen is one example of a solar fuel, which can be used in transportation, without carbon dioxide emissions that contribute to anthropogenic climate change. It could also aid in the clean, large scale manufacture of other important chemicals such as fertilizers used extensively in agriculture.

This study relies upon a technique called electron paramagnetic resonance (EPR) spectroscopy, which is used to study magnetic materials, such as metals which make up biological cofactors. It allows the electronic structure of a cofactor to be deduced providing important information on how these systems function on a molecular level.

The study was a collaboration between researchers at the Max Planck Institutes for Chemical Energy Conversion (MPI CEC) and Kohlenforschung (MPI KOFO) in Mülheim/Ruhr, Germany, the Ruhr University Bochum in Germany, Uppsala University in Sweden and the Australian National University, Canberra, and was recently published in Proceeding of the National Academy of Sciences of the United States of America: