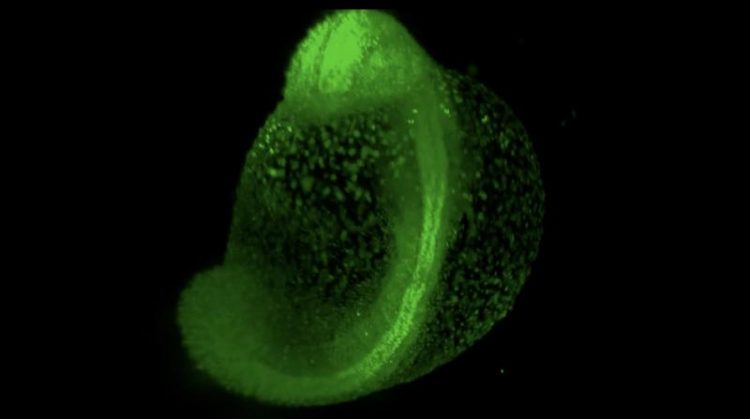 The observation that embryos of some species still undergo normal development after large tissue blocks have been removed is not new. Researchers had already made this discovery at the beginning of the 19th century, thereby demonstrating that tissue differentiation is controlled by adaptive processes. Today we know that these processes depend on signalling molecules known as “morphogens”.

However, how morphogens adapt their activity to different conditions – such as different embryo sizes – is not fully understood. Researchers at the Friedrich Miescher Laboratory in Tübingen have now revisited the old developmental biological experiments:

“The motivation for our current work,” says Dr. Patrick Müller, the corresponding author of the study published in Nature Cell Biology, “was to address these observations with modern quantitative methods and mathematical modelling to uncover the underlying mechanisms.”

The researchers focused on the morphogen “Nodal” and its inhibitor “Lefty”. These two molecules work together to control the formation of the three germ layers (endoderm, mesoderm and ectoderm) during embryonic development. The germ layers roughly correspond to the inside, middle and outside of the embryo, and their establishment is one of the earliest steps in development.

The signal for “inside” is given by Nodal: In the areas where Nodal is most active, cells differentiate into endoderm, while weaker Nodal activity triggers mesoderm formation. When Nodal is suppressed by its inhibitor Lefty, ectoderm forms. This kind of control mechanism is called an “activator-inhibitor” system, and many different systems based on this principle govern a wide range of biological processes.

When large parts of one germ layer are removed, the tissue proportions should be incorrect and development should therefore be disrupted; however, embryos somehow adjust their germ layer proportions and develop just fine.

To see whether the Nodal/Lefty activator-inhibitor system can account for this adjustment, the scientists created smaller zebrafish embryos by removing about one third of their cells, mainly from the ectoderm. Strikingly, the proportions of the germ layers adapted to the embryo’s new size in less than two hours. The distribution of Nodal activity changed even faster, indicating that it is responsible for the adaptive process.

A possible mechanism for how the Nodal/Lefty system can react to such changes was revealed by computer analysis, which took into account all known interactions and molecular properties of Nodal and Lefty. By assessing over 400,000 possible combinations of the unknown properties, the computer program screened for those constellations in which the Nodal/Lefty system could adjust germ layer proportions in response to changes in embryo size.

In such systems, the program revealed, Lefty's concentration needs to increase in smaller embryos. That constrains Nodal signalling further, resulting in reduced endoderm and mesoderm formation and correcting the germ layer proportions.

The researchers experimentally verified this prediction and demonstrated that the model correctly reflected the real process, providing an explanation for a century-old observation. Their results have also drawn attention to a widespread biological principle:

Even in single-celled organisms, similar control processes have been described. Mechanisms that rely on the coupling of overall size to molecule concentrations might therefore be a ubiquitous biological strategy to control growth and differentiation.