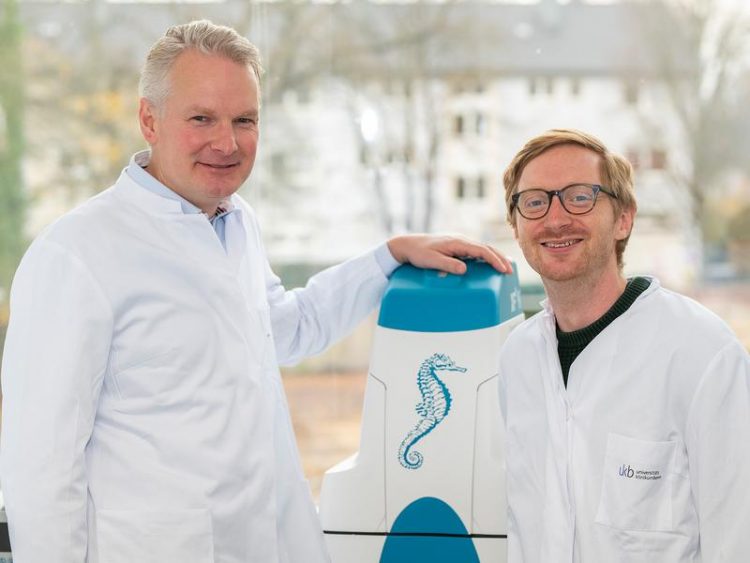 Investigated the fine-tuning of macrophages: Prof. Dr. Eicke Latz (left) and Mario Lauterbach (right) from the Institute of Innate Immunity at the University of Bonn. © Photo: Rolf Müller/UKB

Macrophages can practically “sniff out” intruders: Their cell surface contains numerous sensors, the Toll-like receptors. These work in a similar way to the olfactory receptors in the nose: They are activated when they encounter a specific chemical signal. The alarm they trigger then leads to a series of reactions inside the cell.

“During this phase, macrophages initiate their inflammatory response,” explains Mario Lauterbach, who is completing his doctorate at the Institute of Innate Immunity at the University of Bonn. “How they change their metabolism in the first few minutes and what the consequences are has been unclear so far.”

There are different groups of Toll-like receptors, each of which responds to different “smells”. These are molecules that have emerged as important danger signals in the course of evolution. Among these are the so-called lipopolysaccharides (LPS), important components of the bacterial cell wall. “We have now confronted macrophages with LPS and investigated what happens in the following minutes and hours,” explains Lauterbach.

The scientists were able to show that the cell metabolism changes dramatically shortly after LPS contact: Macrophages immediately absorb more glucose from their environment – but not primarily in order to obtain energy.

Instead, they convert the sugar into so-called acetyl groups, which are small molecules related to acetic acid. These then serve as a kind of label in the cell nucleus: They are used to label genome sequences that are supposed to be read more intensively.

The DNA is actually a meter-long wafer-thin thread. It would, however, be difficult to store in this form. This is why it is rolled up on many small spools, the histones. Enzymes now attach the acetyl groups to certain parts of the histones. This process is stimulated by the increased acetyl group synthesis after the alarm is triggered, which ultimately loosens the coil of DNA and makes the corresponding genes more readable.

“These include genes that are responsible for the release of inflammatory messengers or that improve the mobility of macrophages,” explains Lauterbach.

It has long been known that the activation of Toll-like receptors alters the reading of genes. However, the mechanisms responsible for this differ from the one that has now been discovered. It is likely that this newly discovered mechanism allows the fine regulation of the genetic response.

The results may therefore also provide new starting points, such as for improving the effectiveness of vaccinations. Toll-like receptors also play an important role in mediating the “learned” or aquired immune response. This arm of immunity increases the effectiveness of the defense mechanisms against infections that the body has already been through. Vaccinations strategies are also based on this principle.

In many diseases, such as rheumatism, diabetes or multiple sclerosis, the immune response is misdirected or too strong. “The mechanism we discovered might enable us to inhibit harmful inflammatory processes without suppressing the immune system too much,” hopes Prof. Dr. Eicke Latz, head of the Institute of Innate Immunity. Instead of permanently hunting down (non-existent) invaders, the macrophages could concentrate again on their important tasks.

One reason why it was possible to shed light on the immune mechanism is the excellent cooperation between the University of Bonn, the TU Braunschweig and the LMU Munich. This success is also a result of the Cluster of Excellence ImmunoSensation, of which Latz is a member.

Prof. Dr. Eicke Latz
Institute of Innate Immunity at the University of Bonn
Co-spokesperson of the Cluster of Excellence „ImmunoSensation“
Tel. +49-228-287-51239
E-Mail: eicke.latz@uni-bonn.de