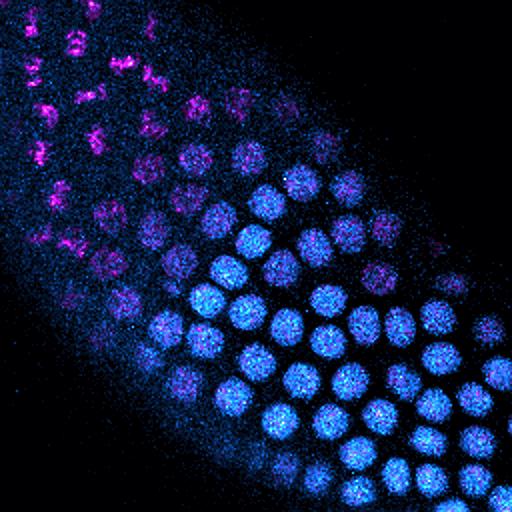 New research describes how cells judge their size to know when to stop dividing. In this digital microscopy image, waves of cell division sweep through a fruit fly embryo to reduce cell size.
Image from the Amodeo Lab/Dartmouth College

The answer to a basic science question could unlock the key to complex medical challenges.

-Scientists have searched for years to understand how cells measure their size. Cell size is critical. It’s what regulates cell division in a growing organism. When the microscopic structures double in size, they divide. One cell turns into two. Two cells turn into four. The process repeats until an organism has enough cells. And then it stops. Or at least it is supposed to.

The complete chain of events that causes cell division to stop at the right time is what has confounded scientists. Beyond being a textbook problem, the question relates to serious medical challenges: Cells that stop dividing too soon can cause defects in growing organisms. Uncontrolled cell growth can lead to cancers or other disorders.

A study from Dartmouth, published in Current Biology, provides a new answer to the question by tackling the problem in reverse: The research focused on large cells that reduce their size through division until enough cells are formed to move to other stages of development.

“The early embryo is an ideal place to study cell size control,” said Amanda Amodeo, an assistant professor of biology at Dartmouth and the lead researcher. “The cells we work with are eggs that are visible to the eye. They don’t need to grow before dividing, so it allows us to look at connections that are obscured in adult cells.”

According to the study, a set amount of the protein histone H3 is loaded into an embryo before fertilization and is used up as the embryo divides into more cells. As histones are consumed to accommodate the growing number of nuclei, they release the enzyme Chk1 to bind with another protein, CDC25, to stop the multiplication of cells.

The research is technical, but the mechanism is relatively straightforward: With histone H3 out of the way in a growing cell, the stop enzyme Chk1 finds and disables the protein that triggers cell cycle progression, CDC25.

“The key to our research result was coming up with the possibility that unusually large amounts of histone H3 may feed into the stop enzyme,” said Yuki Shindo a postdoctoral research fellow at Dartmouth and first author of the paper. “Once we noticed that, we were able to test this idea in our living test tube, fruit fly eggs.”

The new research builds on earlier studies which found that a biological constant exists between the size of a genome and the size of a cell. Researchers knew that once a balance point was achieved, cells would stop duplicating, but didn’t understand how cells could determine the ratio.

To find the answer to the long-running question, the research team studied fruit fly eggs. Because of their large size compared to other cells, the team was able to get a different perspective on the cell cycle.

“We’ve had all of the pieces for years but couldn’t quite get them to fit together,” said Amodeo. “Once we recognized that H3 interacts directly with both DNA and Chk1, the work went very fast. Everything worked the first time, which is a good sign that the hypothesis is right.”

Since the same molecules that control cell division–histone H3, CDC25 and Chk1–are all identified in cancer and other ailments, the finding can help researchers that are seeking answers to questions related to development and disease.

“We were originally curious about a basic biological question on how cells in a growing egg make a decision to stop at the correct timing,” said Shindo. “We are now excited that our findings may also have an important implication for a broader context such as disease.”

Research conducted for this study was performed at and supported by the Lewis-Sigler Institute at Princeton University as well as by grants from the Japan Society for the Promotion of Science, the Uehara Memorial Foundation, and the Japanese Biochemical Society.

Founded in 1769, Dartmouth is a member of the Ivy League and offers the world’s premier liberal arts education, combining its deep commitment to outstanding undergraduate and graduate teaching with distinguished research and scholarship in the arts and sciences and its leading professional schools: the Geisel School of Medicine, the Guarini School of Graduate and Advanced Studies, Thayer School of Engineering and Tuck School of Business.