How are pollen distributed in the air? 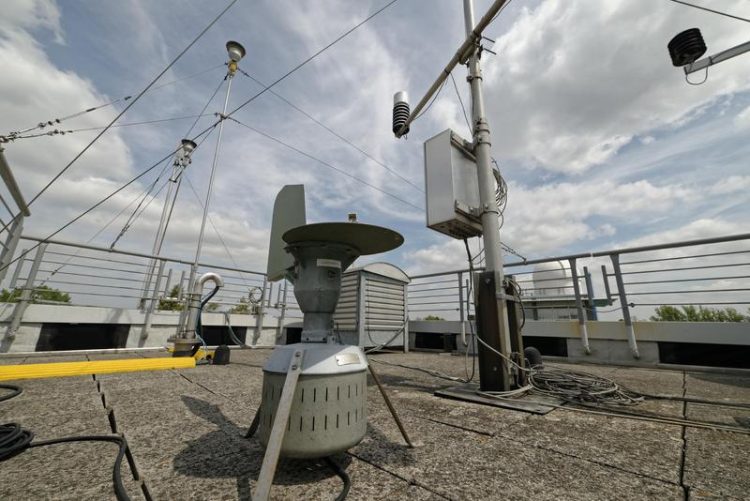 Burkhard trap by University of Turku / FMI for the classical determination of pollen at TROPOS in Leipzig. Tilo Arnhold, TROPOS

Until August, the researchers want to compare a common pollen trap with a mobile lidar (light radar) in order to find out whether it is possible to distinguish the pollen of different tree species by the different surface forms of the pollen.

If this is successful, the lidar devices of the European PollyNet network could in future not only provide information on dust and volcanic ash in the atmosphere, but also on pollen, thus helping to improve models for pollen propagation.

The spread of pollen in the atmosphere is of interest not only to people affected by allergies. Climate research is also interested in these tiny particles because they not only cause allergies, but also have an influence on the climate and the environment.

The seeds of many plants are so small and light that they can be transported by wind over long distances. During their journey in the atmosphere, they scatter sunlight and act as germ on which cloud drops but also ice and precipitation can form. Pollen also influences clouds, rainfall and the Earth's radiation balance.

Knowing more about their vertical distribution in the atmosphere would help, for example, to better estimate how global warming with longer vegetation phases affects cloud formation and how this in turn affects the climate.

The current project of FMI and TROPOS is part of an interdisciplinary approach to allergy research in Leipzig: In spring, a second pollen trap was installed at University of Leipzig Medical Center in cooperation with biologists and monitoring specialists from the Helmholtz Centre for Environmental Research (UFZ) and the German Centre for Integrative Biodiversity Research (iDiv) in order to improve pollen measurements.

The aim of the scientists is to obtain information not only on the number of pollen, but also on their allergen content and other relevant properties. The background are findings from the LIFE study in Leipzig, which is dedicated to the causes of diseases of civilization.

The project on pollen diversity (PolDiv) by UFZ and iDiv, together with the Leipzig Interdisciplinary Centre for Allergology (LICA), aims to find out more about these factors. Therefore, these three Leipzig institutions work closely together. Lidar data and other atmospheric observations by TROPOS could also contribute to this in the future.

In Finland, which is rich in forests, the effect of pollen on health and the microclimate is particularly noticeable. The aerobiology group at the University of Turku therefore operates a network of 9 stations that determine the type and concentration of pollen near the ground using so-called Burkhard traps. Lidar devices, which scan the atmosphere over the ground like a light radar, could help to improve our knowledge about these small particles. Depending on the surface and shape of the pollen, the light is reflected differently.

If not only the propagation time and quantity of the reflected light are measured, but also the rotation (polarization), then this information allows conclusions to be drawn about the properties of the particles. The seeds of birch trees, for example, polarize light relatively little, i.e. the backscattered laser light is rotated little and one can conclude that the pollen has a near spherical shape.

The seeds of pine trees and other conifers polarize light quite strongly, i.e. the backscattered laser light is strongly rotated and thus the pollen has a rather non-spherical shape.

“We have been operating a Raman lidar PollyXT for several years. Now we try to combine the measurements with the data of common pollen traps to investigate the optical properties of the pollen. The aim is to classify pollen remotely by laser,” explains Stephanie Bohlmann from the Finnish Weather Institute (FMI). The first measurements took place in 2016 in the boreal forests at a field station of the FMI in Kuopio, eastern Finland.

In 2018, a measurement campaign followed on Crete, i.e. in the Mediterranean climate. And 2019 will be measured in Melpitz near Leipzig and thus in a temperate, Central European climate. By comparing these three locations with very different climates and pollen conditions, the researchers hope to draw new conclusions about pollen detection via laser.

“Both Kuopio in Finland and Finokalia in Crete are part of the Europe-wide lidar network PollyNet under the auspices of TROPOS, in which the particles in the atmosphere are examined with lasers from the ground. We have therefore gladly made our station in Melpitz and Leipzig available for this investigation and are eager to see which pollen will be visible from the forests of the Dübener and Annaburger Heide”, reports Dr. Holger Baars from TROPOS.

The OCEANET container of TROPOS will be used, which otherwise regularly travels up and down the Atlantic during the transfer journeys of the German research icebreaker Polarstern, but this year it has already been used in Davos in Switzerland and from September will be used on the MOSAiC expedition and thus for overwintering Polarstern 2019/20 in the central Arctic.

Remote sensing of pollen in the atmosphere by laser is a comparatively new method: The University of Alaska in Fairbanks, which collected data on pollen emissions over the forests of Alaska in 2008, is considered to be the first to ever investigate pollen by laser from the ground.

In 2013, researchers from the Gwangju Institute of Science & Technology (GIST) in Korea and the Leibniz Institute for Tropospheric Research (TROPOS) reported in the specialist journal Atmospheric Environment on investigations into the optical properties of natural pollen using a laser with a wavelength of 532 nanometers. This study was the first study of its kind outside North America, according to its own statements, and enabled qualitative statements on pollen properties in the air through more sophisticated laser measurement technology.

Pollen can account for up to one third of the total amount of aerosol particles that influence the optical thickness, i.e. the measure of the light transmittance of the atmosphere. The GIST and TROPOS team therefore concluded that they not only have a major influence on air quality, but also on the climate. Tilo Arnhold