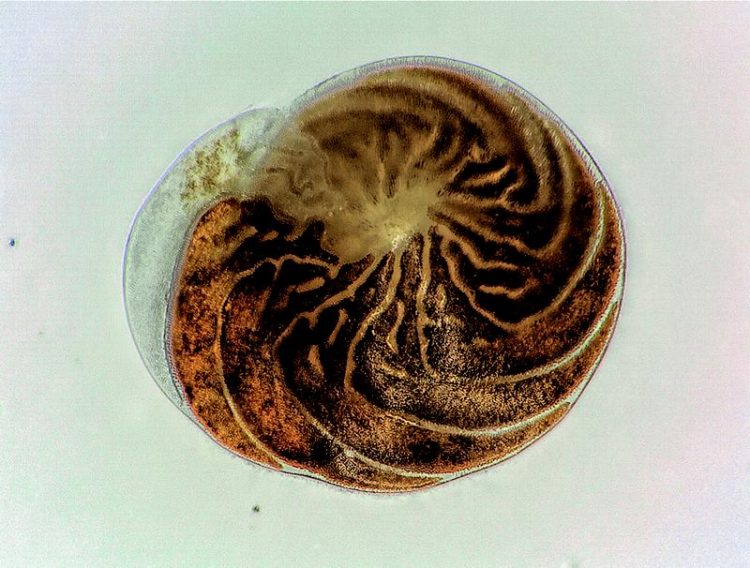 Foraminifera Amphistegina lessonii: The green-brown colouration in the upper left corner shows the symbionts, which have moved into the outer chamber. The Foraminifera has a diameter of around 1mm. © Marleen Stuhr, Leibniz Centre for Tropical Marine Research (ZMT)

Researchers from the Leibniz Centre for Marine Tropical Research (ZMT) in Bremen, the Leibniz Institute for Analytical Sciences (ISAS) in Dortmund and the University of Bremen have been involved in this publication.

Foraminifera are found throughout the ocean – from the intertidal zone to the deepest ocean trenches, from the tropics to the poles. Some species float in the water as plankton, others live on the seabed. Since they form a calcareous casing, these tiny organisms play an important role in reefs in the formation of sediment.

Like tropical corals, some types of foraminifera can only exist in symbiosis with algae. These symbionts live in the cell of their host organisms and supply them with energy. Under changed environmental conditions, such as rising water temperature or light intensity, the protein composition of foraminifera and their symbiotic algae changes. This can damage the community and lead to bleaching, similar to coral bleaching.

A systematic analysis of the proteins, i.e. proteomics, can provide information about the physiological state of the organism. But who is ultimately responsible for the stress response: the foraminifera and thus the host, or the algae, the symbiont?

ZMT scientist Marleen Stuhr investigated this question in her doctoral thesis under the guidance of Professor Hildegard Westphal (Workgroup Geoecology and Carbonate Sedimentology). Over various periods and intervals Stuhr exposed foraminifera of the genus Amphistegina and their symbiotic algae (diatoms) to elevated temperatures.

Together with Professor Albert Sickmann, bioanalyst at ISAS, and Professor Michal Kucera, micropaleontologist at MARUM – Center for Marine Environmental Sciences at the University of Bremen, the geoecologist adapted new proteomics analysis methods to foraminifera. Thus, for the first time, the team succeeded in breaking down the contributions of the unicellular organisms and their symbionts to the stress response.

“In the algal symbionts, we saw an increase in proteins that indicate the degradation of damaged cell components and cell death, while the proteins for photosynthesis declined – a clear sign that this process of energy production was no longer working,” said Marleen Stuhr.

The host organism, on the other hand, appeared to be less susceptible, according to the scientist. “In the thermally stressed foraminifera, we were able to demonstrate a clear increase in the number of proteins required for cell repair, because the stressed symbionts damaged their host. The foraminifera, however, adapted to the new conditions, now increasingly drawing their energy from their energy stores and absorbing more substances from the surrounding environment.”

Co-author Professor Albert Sickmann from ISAS added: “Using physiological measurements, researchers have so far only to a limited extent been able to determine the molecular processes in foraminifera and assign the reaction to environmental stress to the host or symbiont. The microscopically small foraminifera also made it difficult to investigate individual proteins, since the host and symbionts could not be separated. The methods of proteomics can now provide us with entirely new insights.”

In the laboratory, the team of researchers exposed the foraminifera to different temperatures for one month and then dissected the proteins of the organisms together with their symbionts into shorter sections (peptides). The quantity and mass of these components were determined by mass spectrometry. Marleen Stuhr and her colleagues created a database of all known gene and peptide sequences of foraminifera and their symbionts, in this case diatoms. By comparing the detected peptide masses with the database, they were able to determine which proteins were present and from which of the two symbiotic partners they originated. The signal intensity – the amount of peaks in the mass spectra – was used to determine the amount of the respective proteins and their changes compared to non-stressed organisms. Finally, the functions of the proteins and their relative changes in quantity were used to reconstruct the biological and cellular processes.

As a continuation of her work, Stuhr plans to transfer the proteomics approach also to corals. This would provide information on the cellular adaptations that take place in the coral, i.e. the host, and the zooxanthellae, the symbionts, in the event of environmental changes. “This would help us to understand which factors make some organisms more resistant to certain stress influences. This is important to better manage coral reefs in terms of their resilience,” said the scientist.