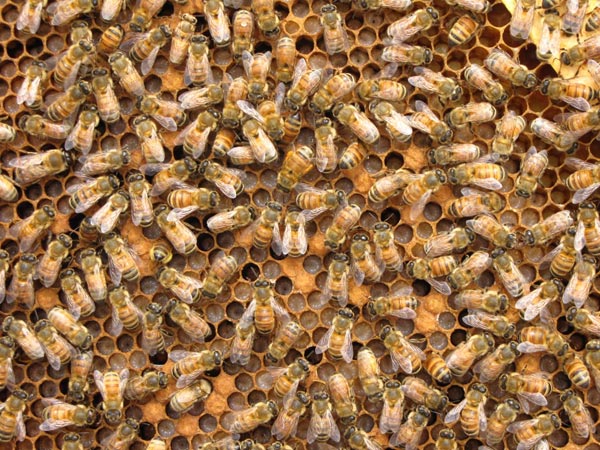 These are bees on a hive. Credit: Bernardo Niño, Penn State

The findings may help scientists develop honey bee treatments that are tailored to specific types of infections. “Our results indicate that different sets of genes are used in immune responses to viruses versus other pathogens, and these anti-viral genes are regulated by two very distinct processes — expression and DNA methylation,” said David Galbraith, graduate student in entomology, Penn State. The results will appear in todays (Mar. 26) issue of PLOS Pathogens.

According to Christina Grozinger, director of the Penn State Center for Pollinator Research, beekeepers lose an average of 30 percent of their colonies every winter and an average of 25 percent in the summer.

“Honey bees have more than 20 types of viruses, and several of them have been linked to losses of honey bee colonies,” she said. “Yet, beekeepers currently do not have any commercially available methods to reduce viral infections.” With a goal of uncovering which genes increase or decrease their activity in response to the presence of viruses, the researchers measured expression levels of all genes in the honey bee genome in both infected and uninfected bees. They found that the RNAi pathway had increased activity and, therefore, is likely an important anti-viral immune pathway in bees.

“Previous studies suggested the RNAi pathway was involved in anti-viral immune responses in bees, but we showed that expression levels of many genes in this pathway are significantly higher in virus-infected bees,” said Grozinger. “The RNAi pathway helps to cut up and destroy viral RNA so it is not infectious.” Scientists and beekeepers are increasingly interested in using RNAi approaches to control viruses and parasites in agricultural crops and in honey bee colonies, according to Grozinger.

“We will need to make sure that any artificial RNAi approaches do not interfere with the natural anti-viral RNAi mechanisms in honey bees,” Grozinger said. In addition to examining gene expression in virus-infected versus uninfected honey bees, the researchers also scanned the honey bee DNA for extra methylation marks that may have been added or removed from genes in virus-infected bees.

The team found that viral infections do change the pattern of DNA methylation in honey bees, and in a completely different set of genes from the ones in the RNAi pathway. Many of these differentially methylated genes are also involved in anti-viral responses in mammals, but they have not previously been linked to anti-viral responses in insects, said Grozinger.

“We found that there was very little overlap between differentially expressed and differentially methylated genes, suggesting dual genomic response pathways to viral infection,” said Galbraith. “For the first time, we characterized both the global gene expression and DNA methylation patterns associated with acute viral infection in honey bees. We confirmed that the RNAi pathway, which has been seen in other insects, is also an antiviral defense mechanism in honey bees. And, for the first time, we observed alterations in DNA methylation patterns in response to viral infection in honey bees.”

Other authors on the paper include Xingyu Yang, graduate student in bioinformatics and Soojin Yi, associate professor of biology, both at Georgia Institute of Technology, and Elina Lastro Niño, assistant extension apiculturist, University of California, Davis. The U.S. Department of Agriculture and National Science Foundation provided funding for this research.