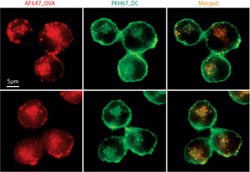 When the body’s own cells turn into ticking time bombs, as in cases of viral infection or cancerous transformation, a mechanism known as ‘cross-presentation’ enables the immune system’s dendritic cells (DCs) to sound the alarm.

“Dendritic cells first internalize cancerous or virus-infected cells through a mechanism called phagocytosis, and then process cellular antigens into short peptides,” explains Heiichiro Udono of the RIKEN Center for Allergy and Immunology in Yokohama. DCs subsequently present these fragments to killer T cells, which seek out and destroy other affected cells. Phagocytosed molecules travel within sealed membrane bubbles called endosomes, and new work from Udono and his colleagues has revealed insights into how these antigens are released into the cytosol prior to cross-presentation1.

Udono’s team focused on heat-shock protein 90 (HSP90), a molecule that previous studies have linked to cross-presentation. HSP90 comes in two forms, á and â, which perform overlapping roles. Mice need at least one of these proteins to live. Udono and colleagues succeeded in generating healthy mice that exclusively lack HSP90á. They found that, although HSP90â appears to make some contribution, the loss of HSP90á had a striking effect on antigen processing. DCs isolated from these mice showed defects in their capacity for cross-presentation, and failed to activate killer T cells efficiently following exposure to ovalbumin, a model antigen.

HSP90á-deficient DCs proved perfectly capable of internalizing ovalbumin within endosomes; however, they generally failed to release this antigen into the cytosol. The researchers noted a similar effect after treating genetically normal DCs with a chemical that inhibits HSP90á (Fig. 1), confirming the central role of this protein in endosomal release.

Udono and colleagues further demonstrated the extent of these defects by injecting HSP90á-deficient mice with cytochrome c, a protein that selectively eliminates a subpopulation of DCs after being taken up and released into the cytosol. Strikingly, cytochrome c treatment had a dramatically reduced effect on DCs from mutant mice relative to their wild-type counterparts. “This is the most sensitive in vivo assay to show antigen translocation to the cytosol,” says Udono. “This phenomenon was absent in HSP90á knockout mice, which makes me confident that our finding is important and has physiological relevance.”

Accordingly, Udono believes that molecules that modulate HSP90 activity might help clinicians to boost a patient’s immune counterattack against infection or cancer. “If we can control the expression levels of HSP90 and other heat shock proteins,” he says, “it could be of great benefit to human health.”

The corresponding author for this highlight is based at the Laboratory for Immunochaperones, RIKEN Research Center for Allergy and Immunology