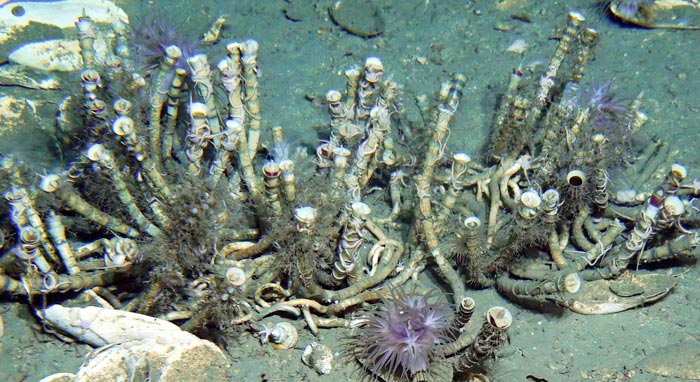 Tubeworms are present as large habitat-forming chitinized tube bushes in the deep-sea, where photosynthesis-derived organic matter are scarce.
Credit: HKUST

Researchers from The Hong Kong University of Science and Technology (HKUST) have decoded the chromosomal-level genome of a deep-sea gutless tubeworm and the genome of its co-living “partner” – a kind of bacteria that provide nutrients they generate from inorganic compounds to the worm for the first time, explaining how the pair adapts to the extreme habitat. Their discovery lays foundation for potential applications such as nutrient generation, biomaterial production and microbial growth control.

Living in deep-sea hydrothermal vents and cold seeps ecosystems characterized by darkness, high pressure and often high concentrations of toxic substances, submarine tubeworms, common living organisms of such extreme environments, are known to owe their survival and fast growth to symbiotic sulphide-oxidising bacteria that live inside their body. Without a digestive system, the tubeworms rely on sulphide-oxidising endosymbiotic bacteria harbored in a specialized internal organ called the trophosome for nutrition, and a unique oxygen, sulphide and carbon dioxide delivery system, to facilitate symbiosis. However, the success behind such a complementary “marriage” between the tubeworms and their co-living bacteria had remained unknown due to the lack of genomic resources.

Now, a joint research team – led by Prof. QIAN Peiyuan, Head and Chair Professor of HKUST’s Department of Ocean Science and Prof. QIU Jianwen, Professor of Hong Kong Batist University’s Department of Biology – managed to sequence and assemble the genomes of both the tubeworm Paraescarpia echinospica and its symbiotic bacteria which the team collected at around 1,400 meters below sea level from a cold seep in the South China Sea.

Using integrated genomic, transcriptomic and proteomic analyses, the team uncovered that the bacteria is highly versatile in its energy use, with the ability to use thiosulfate, carbon monoxide, and hydrogen as alternative energy sources. “It possesses complete metabolic pathways of nutrient generation, and supply nutrients including carbohydrates, amino acids and vitamins/cofactors,” said Prof. Qian, who is also HKUST’s David von Hansemann Professor of Science. In addition, the tubeworm endosymbiont has evolved elaborate strategies to distract the host’s protective immunity and evade its defenses. Meanwhile, the host’s genome has been remodeled to facilitate symbiosis. It encodes not only enzymes to digest the symbionts for nutrients, but also a programmed cell death pathway that controls the endosymbiont population to a level that is most optimal to the worm itself.

To understand the mechanisms of tube formation, the team further analyzed the proteins of the tubeworms’ tough chitinous tube. “We discovered 35 chitin tube matrix proteins, including synthases that manufacture chitin microfibrils and secrete them to the extracellular matrix, chitin-binding proteins which cleave chitin and provide a polymer framework for the organic matrix, and proteins that enhance the toughness and remodel the chitin scaffold,” said Prof. Qiu.

“The research not only advances our knowledge of the holobiont’s adaptation mechanisms shaped by the extreme deep-sea chemosynthesis-based environments, but also facilitates comparative studies on the diversity and evolution of Lophotrochozoa – a larger group which includes worms, mollusca and other marine invertebrates. Despite its diversity, Lophotrochozoa is underrepresented in genomic studies,” Prof. Qian added.

The work also opens new directions for potential applications, including using the unique enzymes in the biosynthesis for biomaterials production, developing technology to remediate nutritional deficiency, designing strategies on microbial growth control based on the interactions between microbes and animals.

The tubeworm and symbiont genome has been published in the international academic journal Molecular Biology and Evolution and The ISME Journal, respectively.