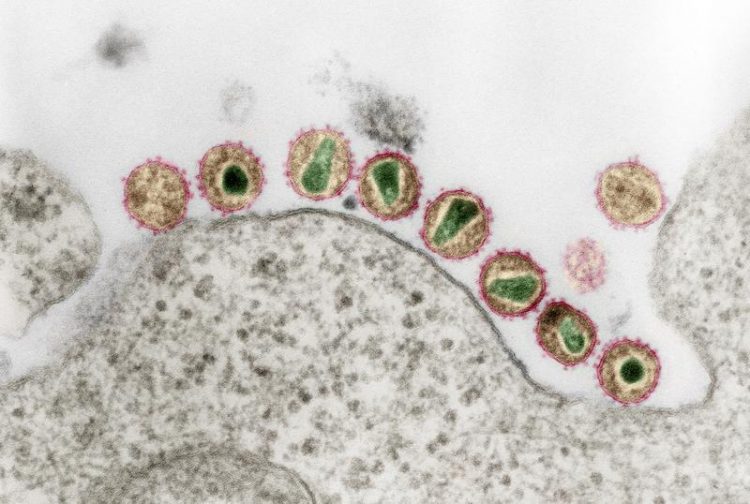 A cell’s genetic material, in the form of DNA, is usually only ever found inside the cell nucleus and in its “power stations,” the mitochondria. If DNA occurs outside these normal locations, for example in the cytoplasm, an alarm signal is sent to the cell.

This is because DNA is only found in the cytoplasm when the cell has degenerated into a tumor cell or when a virus has smuggled itself in. In both cases, it is best for the body if the cell is destroyed in order to prevent the ominous event from spreading.

This is where the enzyme cGAS comes into play: Cyclic GMP-AMP synthase binds to DNA in the cytoplasm, triggering a signaling cascade that prompts the production of antiviral proteins and eventually triggers an immune response.

During an infection with a DNA virus, e.g., herpes or HIV viruses, which transcribe their RNA genome into DNA, part of the viral DNA from the virus particle enters the cytoplasm of the cell, where it meets the DNA sensor cGAS and an immune response is triggered.

This cellular defense mechanism has already been demonstrated in numerous studies into how the body defends itself against different DNA viruses. Unfortunately, most DNA viruses have developed special antagonists tasked with reducing the effectiveness of cGAS.

The AIDS virus HIV-1, which is a retrovirus, has an RNA genome that it temporarily converts into DNA in infected cells. This DNA is integrated into the DNA of the host cell and thus ensures the virtually infinite survival of the virus’s genetic information.

The question of whether this DNA intermediate is recognized by cGAS and can lead to an antiviral immune response has long been disputed. This is because only one single copy of DNA is produced per infection, which is quickly imported into the cell nucleus.

For their current study, Christine Goffinet’s research group teamed up with scientists from the Hannover Medical School, TWINCORE, and others to demonstrate that HIV-1 does indeed manage to evade detection by this enzyme in T cells – the most important target cells of HIV-1 in vivo. T cells form part of the immune system and are essential for triggering an effective immune response.

Julia Kazmierski, co-author of the current study, combined T cells and HIV-1 viruses in a petri dish. “We found that the production of the DNA intermediate in infected cells did not trigger a measurable cGAS-dependent reaction or a significant immune response.

Even when we experimentally destabilized the viral envelope, allowing increased amounts of viral DNA to escape into the cytoplasm of the infected cells, no measurable immune response was triggered.”

In contrast, the same T cells produced a strong cGAS-dependent immune response to an infection with another DNA virus, HSV-1. The researchers suspect that the comparatively short HIV-1 DNA is present in the cytoplasm in insufficient quantities and is not long enough to be detected by cGAS.

The immunodeficiency disease AIDS, which is caused by the HIV virus, can in most cases be treated very effectively with antiretroviral drugs. As a result, those affected have an almost normal life expectancy if therapy is started soon after the infection occurs. However, enough resistance is witnessed for scientists like Goffinet to want to continue in their search for a new weak spot.

“We had actually hoped that we would be able to utilize the very effective cGAS system in immunomodulatory therapy against HIV-1,” says Goffinet. “But unfortunately, our results do not support this. On the contrary, our study shows us once again how insidiously the AIDS virus repeatedly undermines all our immune system’s counterstrategies.”

Nevertheless, Goffinet and her team will not give up their fight against the AIDS virus and will continue to search for promising new ways to target HIV-1 – including and especially in times of corona.

“The coronavirus pandemic has shown us just how important it is to continue research on various pathogens,” stresses Goffinet. “Improving HIV-1 therapy and developing a vaccine against HIV-1 infections is now more important than ever. The more we know about different viruses, the better prepared we are for the next pandemic.”

The study was funded by the German Research Foundation (DFG Priority Programme 1923: Innate Sensing and Restriction of Retroviruses) and the BIH.

https://www.bihealth.org/en/notices/hiv-1-the-undercover-agent/ More information about the paper.