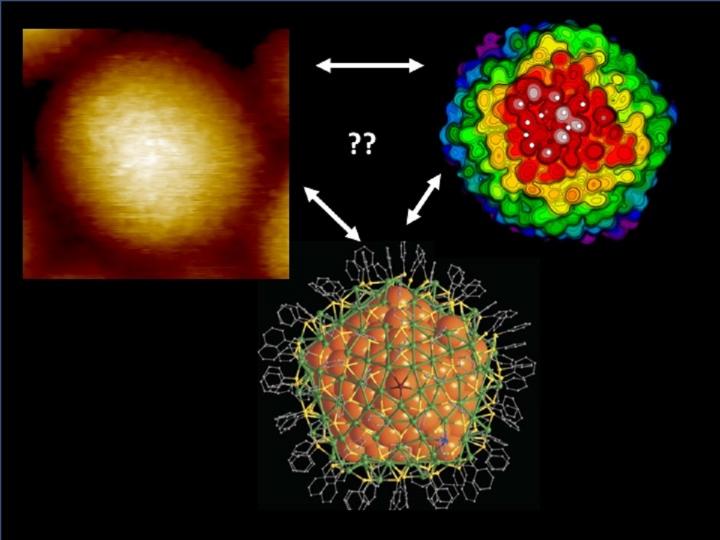 Studying the surface structures of nanoparticles at atomic resolution is vital to understanding the chemical properties of their structures, molecular interactions and the functioning of particles in their environments. Experimental research on surface structures has long involved imaging techniques suitable for nanometer-level resolution, the most common of which are based on electron tunnelling, the abovementioned scanning tunnelling microscopy (STM), and atomic force microscopy (AFM) based on the measurement of small, atomic-scale forces.

However, achieving molecular resolution in imaging has proven highly challenging, for example because the curvature of the object to be imaged i.e. the nanoparticle's surface, is of the same order as the curvature of the scanning tip. Measurements are also sensitive to environmental disturbances, which may affect the thermal movement of molecules, for example.

The researchers used previously characterised silver nanoparticles, with a known atomic structure. The metal core of the particles has 374 silver atoms and the surface is protected by a set of 113 TBTT molecules. TBBT (tert-butyl-benzene thiol) is a molecule with three separate carbon groups on its end. The particle's outer surface has a total of 339 such groups.

When this type of nano-particle sample was imaged at low temperatures in the STM experiment, clear sequential modulations were observed in the tunnelling current formed by the image (see left part of the image). Similar modulations were noted when individual TBBT molecules were imaged on a flat surface.

Based on density functional theory (DFT), the simulations performed by Häkkinen's research team showed that each of the three carbon groups of the TBBT molecule provides its own current maximum in the STM image (see the right part of the image) and that the distances between the maxima corresponded to the STM measurement results.

This confirmed that measurement was successful at sub-molecular level. The simulations also predicted that accurate STM measurement can no longer be successful at room temperature, as the thermal movement of the molecules is so high that the current maxima of individual carbon groups blend into the background.

“This is the first time that STM imaging of nanoparticle surface structures has been able to 'see' the individual parts of molecules. Our computational work was important to verifying the experimental results. However, we wanted to go one step further. As the atomic structure of particles is well known, we had grounds for asking whether the precise orientation of the imaged particle could be identified using simulations,” says Häkkinen, describing the research.

To this end, Häkkinen's group computed a simulated STM image of the silver particle from 1,665 different orientations and developed a pattern recognition algorithm to determine which simulated images best matched the experimental data.

“We believe that our work demonstrates a new useful strategy for the imaging of nanostructures. In the future, pattern recognition algorithms and artificial intelligence based on machine learning will become indispensable to the interpretation of images of nanostructures. Our work represents the first step in that direction. That's why we have also decided to openly distribute the pattern recognition software we had developed to other researchers,” says Häkkinen.

The nanoparticle synthesis was performed in Xiamen University by Professor Nanfeng Zheng's research group and the STM measurements were carried out at Dalian Institute of Chemical Physics under the direction of Professor Zhibo Man. PhD student Sami Kaappa and senior researcher Sami Malola from Professor Häkkinen's group performed the calculations for the project. The research of Professor Häkkinen's group is in receipt of funding from the AIPSE programme of the Academy of Finland. The CSC – IT Center for Science in Finland and the Barcelona Supercomputing Center provided the resources for all simulations requiring high-power computing. The Barcelona simulations were part of the NANOMETALS project supported by the PRACE organisation.

The Academy of Finland's mission is to fund high-quality scientific research, provide expertise in science and science policy, and strengthen the position of science and research. In 2018, our funding for research amounts to 444 million euros. Part of our funds come from proceeds of Finland's national gaming company Veikkaus. In 2018, these proceeds account for 70.7 million euros of our total funding for scientific research.