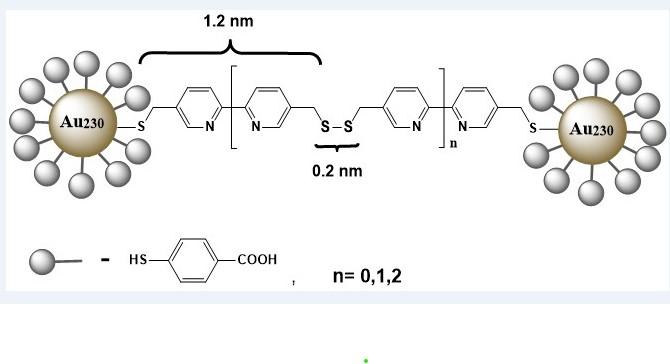 Manufacture of chemical sensors and catalysts based on gold nanoclusters gained new light from recent cutting-edge research. Chemists at the University of Jyväskylä, Finland and the University of California succeeded in determining the atomic precise structure of a chain of gold nanoclusters attached to each other. In this study the researchers revealed the disulfide-bridging bond between the bound nanoclusters. Linked gold nanocluster structures advance our understanding of the optical and electronic response of these systems which hold future perspectives in nanoelectronics and bioimaging. The study was published in The Journal of Physical Chemistry Letters publication in January 2020.

These structures – practically huge molecules- were studied four years ago by a researchers at the Nanoscience Center of the University of Jyväskylä. At that time, researchers were the first in the world to build a chains of gold forged with atomic precision, which were named the world's smallest gold chains (Nanoscale, 2016).

In a just released spatially resolved imaging study of individual bonds, researchers investigated the structure of the chain with the precision of atoms and provided experimental confirmation that, the gold nanoparticles are linked together by bridging disulfide bonds. The proof of disulfide linking was to date the subject of speculatithe researchers revealed the disulfide-bridging bond between the bound nanoclusters. Linked gold nanocluster structures advance our understanding of the optical and electronic response of these systems which hold future perspectives in nanoelectronics and bioimaging. The ston.

“Modifying the surface of nanoclusters and the molecules connecting them is a step closer to new biological, medical and electronic applications,” says Docent Tanja Lahtinen from the University of Jyväskylä.

A chain of nanoscale gold particles reacts with light.

“In these nanoscale superstructures, the electron clouds of the metal particles of adjacent particles are interconnected, opening up the possibility of studying the interactions between particles with very accurate theoretical calculations, now that we know, for sure, how the structures have formed,” says researcher Eero Hulkko.

The atomic precise structure was revealed by combining imaging techniques

The exploration of nanoscale chemical structures has promoted by the rapid development of chemically selective imaging techniques. Atomic resolution of individual molecules requires extremely high resolution and sensitivity of the equipment.

The measurements were made at the IMRI center, University of California using the JEM-ARM300F Grand ARM TEM equipment, where currently has the best commercially available electron microscopy equipment.