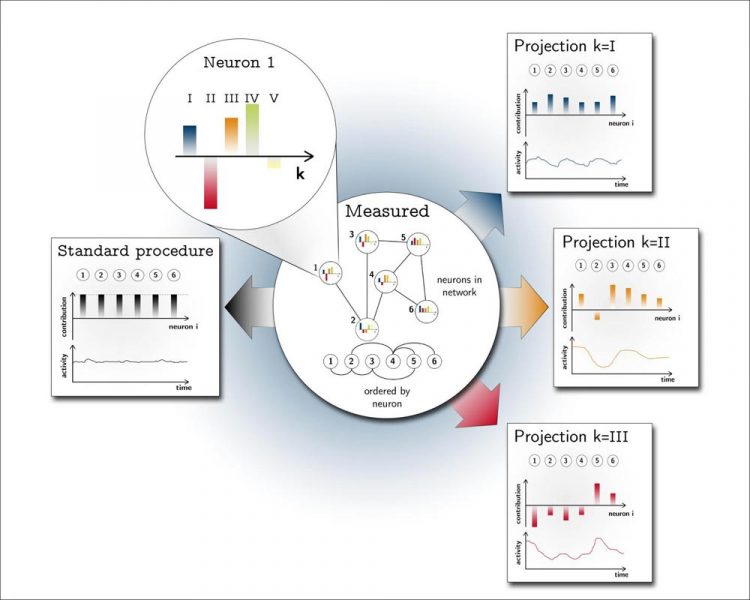 The heterogeneous, critical dynamics show no avalanche-like increase, instead manifesting in specific projections of nerve cell activity in which neurons are weighted differently -- which corresponds to a different degree of excitatory or inhibitory influence of individual neurons. Copyright: Forschungszentrum Jülich / David Dahmen

Neuronal networks in the brain can process information particularly well when they are close to a critical point – or so brain researchers had assumed based on theoretical considerations. However, experimental investigations of brain activity revealed much fewer indicators of such critical states than expected.

Scientists from Forschungszentrum Jülich and RWTH Aachen University have now proposed a possible explanation. They showed that neuronal networks can assume a second, previously unknown critical mode whose hidden dynamics are almost impossible to measure with conventional methods.

Critical points, at which complex systems abruptly change their characteristics, are familiar concepts in physics. Ferromagnetic materials are one example.

Below the critical temperature, also known as the Curie temperature, the electron spins of the material align so that they all point in the same direction. The tiny magnetic moments of the individual spins thus add together, which can be measured from the outside as a spontaneous magnetization of the material.

Very similar dynamics were previously detected in measurements of brain activity. Brain signals are a typical case, where large areas of the network become active simultaneously in an avalanche-like fashion within a very short time.

Overall, however, the phenomenon occurs much more rarely than expected. Scientists from Forschungszentrum Jülich and RWTH Aachen University have now presented a solution for this apparent contradiction in the journal PNAS. They showed that neuronal networks can exhibit a second, previously unknown type of criticality.

An analysis of the simultaneous activity of 155 nerve cells showed that for this second type of criticality, a large number of nerve cells also exhibit coordinated behaviour.

However, the interaction comprises not only the simultaneous activation but also the targeted inhibition of large groups of neurons. This newly discovered criticality permits the network to represent signals in numerous combinations of activated neurons and therefore – according to the researchers – to efficiently process information in parallel.

This also explains why no sudden increase in network activity can be detected from the outside. Standard methods such as EEG or LFP essentially add the signals of many neurons together. In this second critical state, however, the number of active nerve cells remains mostly constant.

The heterogeneous dynamics can therefore not be recorded with these methods. Only by using highly developed mathematical methods borrowed from statistical physics could the researchers, headed by Prof. Moritz Helias, make experimentally verifiable predictions of the correlations between the nerve cells.

For the direct experimental detection of the network state they had predicted by means of theory and simulation, the researchers, working with lead author Dr. David Dahmen, drew on Prof. Sonja Grün's expertise in analysing the joint activity of many nerve cells.

“This study has a far-reaching impact in that Prof. Helias and his team succeeded in applying field theory, which is a very successful method in physics, to neuroscience. We can thus hope for further insights in future,” explains institute head Prof. Markus Diesmann (INM-6). Diesmann plays a major role in the EU's Human Brain Project (HBP), one of the largest neuroscientific projects worldwide, which unites the work of 500 researchers in 19 EU member states.

“In the HBP, we are concerned with the technology required to simulate large parts of the brain with all their nerve cells. These simulations on their own do not yet yield insights, however. They simply result in simulated data which are just as complicated as the data from nature.

However, they allow us to modify networks in a much more targeted manner than would be possible using experimental methods. But only by simplifying them, in a controlled way, into manageable mathematical models with fewer equations will we have the potential to understand the underlying mechanisms,” explains Diesmann.