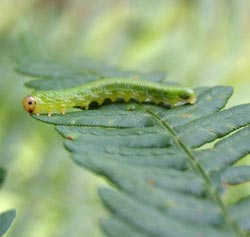 The larva of the sawfly Strongylogaster multifasciata feeds on a bracken leaf. Like other plants, ferns produce toxic substances and can successfully defend themselves against herbivores. Unlike flowering plants, however, bracken ferns do not emit volatiles that attract parasitoids or predators of herbivorous larvae.<br><br>Photo: Max Planck Institute for Chemical Ecology/ Venkatesan Radhika<br>

They dominated the earth for 200 million years and numerous different species can still be found all over the world: mosses, horsetails and ferns.

Researchers from the Max Planck Institute for Chemical Ecology in Jena, Germany, have now found out that bracken ferns (Pteridium aquilinum) do not release any volatiles when they are attacked − unlike many of the now dominant and evolutionary younger flowering plants.

Such an emission of volatile compounds may attract the pest insects’ enemies, such as ichneumon wasps or predatory bugs, that parasitize herbivores. Nevertheless, volatile emission could be also elicited in fern fronds, if they had been treated with plant hormone jasmonic acid. Jasomonic acid induces the synthesis of volatile substances in flowering plants. This suggests that ferns can in principle mobilize this kind of defense reaction. However, they do not use this indirect defense to fend off herbivores.

Ferns are so-called vascular cryptogams, because they don’t produce flowers and seeds like the currently largest group of plants, the spermatophytes or seed plants. Ferns reproduce and spread entirely via spores. Their metabolic activities and especially their defenses against herbivores, however, are similarly efficient in comparison to flowering plants. Ferns can be found in large populations all over the world, although their evolutionary age is more than 400 million years.

Botanists consider the bracken fern Pteridium aquilinum as one of the most widely distributed plant species. It can be found in the most different habitats. Herbivores attack bracken ferns strikingly less often than flowering plants. One explanation for this phenomenon could be that fern fronds contain especially toxic substances that keep pest insects at bay: Chemical composition analysis detected indanones, cyanogenic glycosides and tannins, amongst other substances. But can those “living fossils” also use indirect defenses against their enemies, like other plants do?

Defense mechanisms in bracken fern include indirect defenses. However, herbivory does not induce them.

Beans, corn, cotton, poplar trees, tobacco plants and potatoes: These and other flowering plants are known to produce the plant hormone jasmonic acid in their leaves after herbivore attack. Jasmonic acid stimulates the synthesis of volatile substances, such as compounds of the terpenoid family. This defense strategy can be used by plants to attract the enemies of herbivorous insect larvae. Venkatesan Radhika, PhD student in the Department of Bioorganic Chemistry of the institute, wanted to find out, whether bracken ferns could also emit these attractants when they were attacked. She used larvae of two insect herbivore species to damage the fern fronds: fern specialist Strongylogaster multifasciata and the generalist herbivore Spodoptera littoralis, which feeds on many different plants. She also used a robotic device, MecWorm, which continuously punched a limited area of the fern frond with a metal bolt, thereby mimicking the mechanical wounding caused by feeding herbivores. The result: The fern fronds release only very small amounts of volatile compounds, if at all. Even the signal molecule jasmonic acid could hardly be detected in the fronds.
However, if fern fronds were directly treated with jasmonic acid, they responded like the leaves of flowering plants and they released a typical odor bouquet. The scientists studied this effect in more detail and discovered that the release of volatile terpenoids from the fern could even be induced by treatment with early precursors of jasmonic acid synthesis (OPDA and linolenic acid). Biochemical experiments revealed that these volatile terpenoids are produced by the same metabolic pathway already known from flowering plants. “It is likely that the herbivory-induced accumulation of jasmonic acid is not sufficient to trigger the production of volatile compounds in our experiments,” says Wilhelm Boland, director of the department.

Could it be possible that ferns do not need indirect defenses by means of volatile emission? Is the presence of highly toxic substances in the fern fronds sufficient to fend off herbivores? “We can only speculate,” says Boland. Indirect defense strategies may have evolved from originally direct defenses (e.g. in the Chinese ladder brake, Pteris vittata) or, on the other hand, in the context of pollinator attraction to volatiles, which is a trait that has naturally evolved in flowering and seed-producing plants and not in flowerless ferns, the scientist continues. It remains fascinating though, that even without apparent indirect defenses bracken ferns successfully colonize our planet to this day. [JWK/AO]