Hematopoietic stem cell marker: A key player in the ontogeny of hematopoiesis 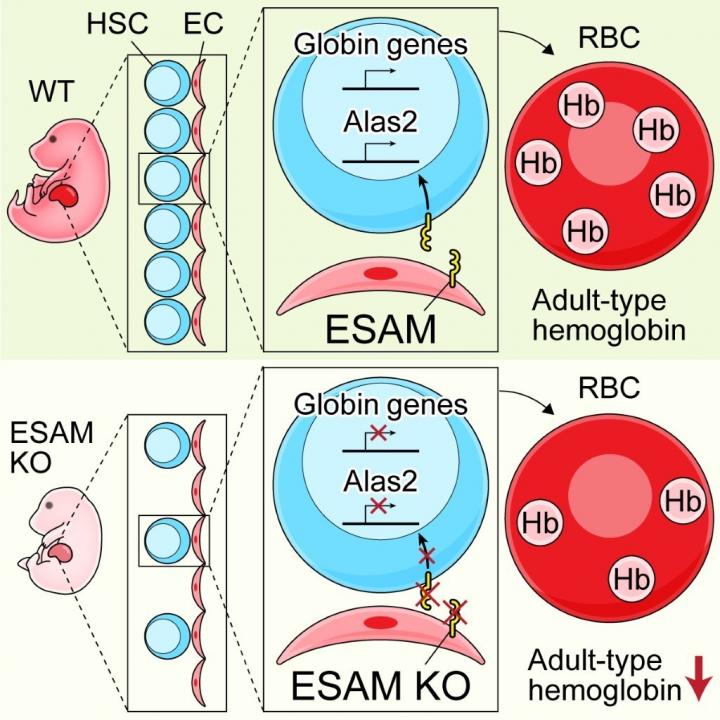 ESAM deficiency causes high fetal mortality and decreased expression of Alas2, and adult-type globin genes in ESAM-null HSCs impairs development of adult-type erythropoiesis. This shows the contribution of ESAM to the ontogeny of definitive hematopoiesis and the functional involvement of ESAM-expressing endothelial cells. Credit: Osaka University

In hematopoiesis, a process essential for growth and life maintenance for mammals, HSCs give rise to other blood cells for the organism's entire life. Hemangioblasts, the multipotent precursor cells, differentiate into hematopoietic and vascular endothelial cells.

The microenvironment in bone marrow provides signals that regulate and support the production of blood cells necessary to maintain homeostasis of HSCs.

In the same year, this group also clarified that ESAM-deficient mice treated with an anti-tumor drug died before hematopoietic recovery. (Normally, red and white blood cells temporarily decrease after the administration of the anti-tumor drug and recover later.) They were aware that ESAM had an important function, but could not identify the role of ESAM during fetal life.

In this study, the group found that the adult-type hemoglobin synthesis ability of ESAM-null fetal livers was lower than that of wild-type mice and that expression of adult-type hemoglobin-related genes markedly decreased in ESAM-null HSCs. From these findings, they elucidated that ESAM played an important role in the development of definitive hematopoiesis, particularly of adult-type erythropoiesis.

In HSCs co-cultured with a murine stromal cell line, ESAM-null HSCs exhibited functional disruption of differentiation into adult-type blood cells. In fetuses from conditional ESAM-knockout mice, in which ESAM was deficient specifically in HSCs or ECs, the hematopoiesis-supporting ability was also impaired in ECs derived from ESAM-null mice.

Lead author UEDA Tomoaki says, “Properties of HSCs and hematopoiesis mechanisms are not well understood because it is difficult to study hematopoiesis, especially in human fetal life. We'd like to continue our research so that our achievements will elucidate the mechanisms of hematopoiesis and lead to the identification of the cause of congenital disorders of the hematopoietic system, especially the cause of genetic anemia, and the development of treatment methods.”

The article, “Endothelial cell-selective adhesion molecule contributes to the development of definitive hematopoiesis in the fetal liver,” was published in Stem Cell Reports at DOI: https://doi.org/10.1016/j.stemcr.2019.11.002.