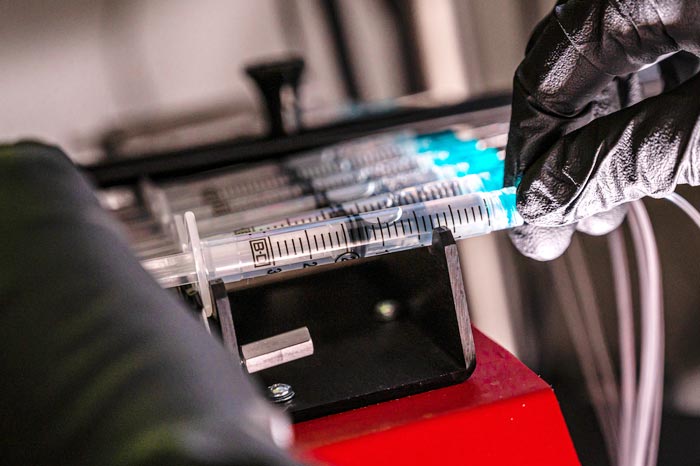 Rice University bioscientists have developed a microfluidic platform for high-throughput studies of how bacteria evolve antibiotic resistance. One syringe of a solution containing bacteria or an antibiotic can provide millions of microspheres for analysis.
Credit: Jeff Fitlow/Rice University

A new experimental platform developed at Rice University promises to speed up the discovery of how infectious bacteria become resistant to antibiotics.

The microfluidic application by Rice bioscientist Yousif Shamoo and his team quickly encapsulates bacteria with varying concentrations of antibiotics to analyze how they evolve to become resistant.

“The idea of using microfluidics to encapsulate cells isn’t new; there are plenty of lab-on-a-chip devices already,” said Shamoo, who specializes in the study of multidrug-resistant bacteria. “What we’ve done is apply it to biomarker discovery for antibiotic resistance.”

The established technique for studying resistance involves feeding antibiotics in gradually increasing amounts to vials of bacteria in a solution. That reveals how some microbes evolve resistance, but favors mutants that grow fastest and makes it difficult to control other factors like population size, number of generations and the space they occupy, all of which can influence the evolutionary process.

Putting cells into microdroplets overcomes those limitations by allowing researchers to fine-tune their environments, allowing them to study new evolutionary trajectories.

“The droplets are a controlled environment where the cells grow in their own ecosystems,” Shamoo said. “That’s similar to what happens when a wound gets established in your body, where there are a few bacteria instead of the millions in a test tube. We think these microfluidic droplets are a better approximation of the early stages of an infection.”

One milliliter of the bacteria/doxycycline emulsion can contain about 2.6 million droplets, each of which can be thought of as a tiny bioreactor, he said.

“It only takes about a teaspoon of the solution to quickly produce, literally, about a million microdroplets, whereas before we might have used liters,” Shamoo said. “This allows us to do very densely replicated studies that just aren’t possible when you’re limited to test tubes.”

The devices developed by postdoctoral researcher and lead author Seokju Seo and undergraduate Saoirse Disney-McKeethen generate oil-coated droplets with well-defined sizes. “We control the size of the droplets through microchannels etched onto silicon wafers through photolithography,” Seo said. The etched wafers were then used as masters to mold the polymer devices.

For their proof-of-concept experiments, they exposed single-cell Escherichia coli bacteria to varying amounts of doxycycline to analyze the conditions under which bacteria evolve resistance to the common antibiotic.

Each experimental run contained one configuration of droplet size, bacteria count and antibiotic concentration. After allowing the cells to reproduce, their genomes were analyzed by co-author Heer Mehta, a microbiologist in the Shamoo lab.

“The droplets are fairly sturdy because of the surfactants we use, and maintain their coherency for over 24 hours,” Disney-McKeethen said. “We can then extract and isolate the DNA and send it out for whole-genome sequencing.”

The researchers noted their platform turned up not only the kind of evolution seen in traditional studies but also previously unknown pathways to resistance that involved large-scale alterations to the cells’ genomic structures.

With their initial experiments done, the lab is now testing a range of microbes to see how they evolve resistance. “We’re expanding our zoo to include other more difficult pathogens, including a strain of E. coli we know is quite dangerous in hospitals,” Shamoo said.

He said the platform may also be employed to quickly and accurately analyze biomarkers and to screen drug candidates, the topic of ongoing studies in the lab.

Co-authors of the paper are Rice graduate students Ramya Ganiga Prabhakar and Xinhao Song. Shamoo is the Ralph and Dorothy Looney Professor of BioSciences and Rice’s vice provost for research.

This news release can be found online at https://news.rice.edu/news/2022/halting-antibiotic-resistance-little-less-futile.

Rice University bioscientists have developed a microfluidic platform for high-throughput studies of how bacteria evolve antibiotic resistance. Each 60-micron droplet contains a combination of E. coli and doxycycline, an antibiotic.(Credit: Shamoo Lab/Rice University)

Microdroplets containing bacteria and an antibacterial drug flow through a chamber in an experiment at Rice University. Rice bioscientists are developing a platform for high-throughput studies of how bacteria evolve antibiotic resistance. (Credit: Shamoo Lab/Rice University)

Rice University bioscientists have developed a microfluidic platform for high-throughput studies of how bacteria evolve antibiotic resistance. One syringe of a solution containing bacteria or an antibiotic can provide millions of microspheres for analysis. (Credit: Jeff Fitlow/Rice University)

An illustration shows how microbes and antibiotics are combined at Rice University to facilitate microspheres in high-throughput studies of how bacteria evolve antibiotic resistance. (Credit: Shamoo Lab/Rice University)

Located on a 300-acre forested campus in Houston, Rice University is consistently ranked among the nation’s top 20 universities by U.S. News & World Report. Rice has highly respected schools of Architecture, Business, Continuing Studies, Engineering, Humanities, Music, Natural Sciences and Social Sciences and is home to the Baker Institute for Public Policy. With 4,052 undergraduates and 3,484 graduate students, Rice’s undergraduate student-to-faculty ratio is just under 6-to-1. Its residential college system builds close-knit communities and lifelong friendships, just one reason why Rice is ranked No. 1 for lots of race/class interaction and No. 1 for quality of life by the Princeton Review. Rice is also rated as a best value among private universities by Kiplinger’s Personal Finance.