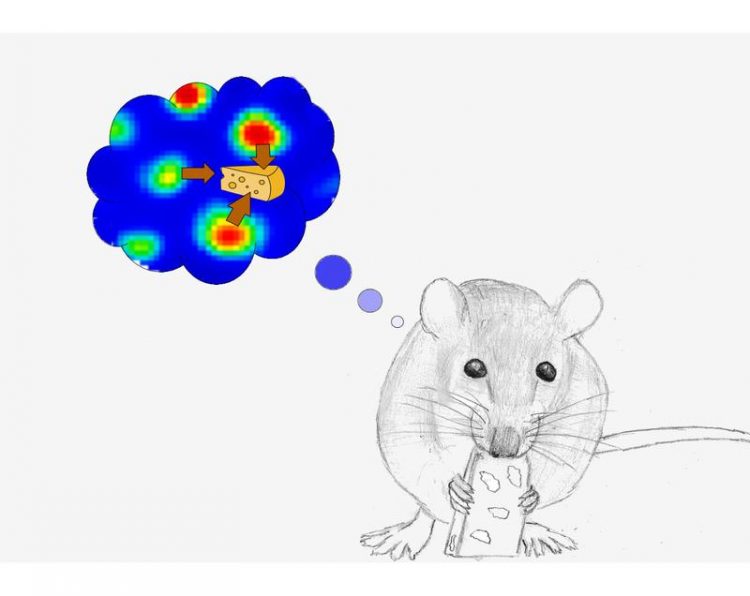 Grid cell fields shift towards the location of a hidden food reward. No cheese was used in the actual experiments! Michele Nardin

A team of scientists at the Institute of Science and Technology Austria (IST Austria) now shows that grid cells go beyond providing simple spatial coordinates: They also carry information related to goals, deforming their activity fields to provide rats with a “treasure map” of where to reach goals, like hidden rewards.

This is the result of a new study by the research group of Jozsef Csicsvari, Professor at IST Austria, including co-first authors Charlotte Boccara, now at the University of Oslo, and PhD student Michele Nardin, published today in the journal Science.

The hippocampus is a brain area essential for finding one’s way. It contains neurons called place cells. Place cells make a mental map of the environment we navigate in, as each neuron is only active at specific locations. Knowing which place cell is active tells our brain where we are, as if they were the little arrows indicating a “you are here” signal for our brain.

Grid cells are another type of neurons essential for orientation. They are located in a different brain region, the entorhinal cortex. Since their discovery, grid cells have fascinated mathematicians and neuroscientists alike. Contrary to place cells, which are active only in one location, grid cells are active in many locations. Yet these locations are far from random; on the contrary, their activity follows a strikingly regular hexagonal firing pattern, drawing a mosaic pattern of the whole environment.

“Imagine a map of Vienna. Most tourists need to look at the coordinates to navigate and find this amazing Vietnamese restaurant near Karlsplatz in B5. Well, grid cells provide your brain with these coordinates: Every time you cross one of the grid’s nodes, the grid cell activates. At least that’s what we thought…,” explains first author Charlotte Boccara.

However, the question of whether this is all that grid cells do has been debated for the past five years, says Boccara: “Researchers have observed that the firing pattern of grid cells is sometimes deformed. They have thus wondered whether grid cells may play a broader organisational role for any type of information, not just space.”

In the current study, the researchers investigated whether the grid cell firing pattern changes when rats learn the location of hidden rewards. In this test of goal-driven behaviour, rats first learned the location of three hidden food pellets and then tried to find them again. By recording the activity of grid cells, the researchers could observe whether and how firing patterns change through goal learning.

“We saw that the majority of grid cells respond to goal learning. Their firing pattern is deformed by the introduction of a goal,” explains Boccara. Interestingly, the grid cell fields closest to the reward location move towards it the most, while fields further away shift less. “Our results mean that grid cells carry information related to goals, not only to space. They have more organizational power than previously thought.”

As the researchers tested different, random goal locations on several consecutive days, they also got insights into how goal-directed learning and goal representation occurs. Boccara: “As the rats learn about new locations, we see that the grid pattern shifts between the old pattern from the previous day and the new pattern. After learning, the new pattern is more present.”

At the same time, the researchers recorded activity from the hippocampus, where place cells are located. The scientists observed that place cell firing also shifts towards the goal location. However, while the grid cells maintained the deformed pattern overnight, the place cells are “reset”. This is surprising, says Jozsef Csicsvari: “It is a paradox: The grid cells remember where the rewards were, but the place cells don’t. This suggests that grid cells are important for behaviour.”

Boccara adds: “Our results have implications on our understanding of how circuits work and which brain region sets the tone. Is it the entorhinal cortex that dictates to the hippocampus how to shift the firing pattern? Our result would suggest that maybe grid cells tell place cells where relevant regions are, and then the place cells map these areas more finely.”

Charlotte Boccara, previously a postdoc in the lab of Jozsef Csicsvari, is now at the University of Oslo’s Institute of Basic Medical Sciences, where she is setting up her own group. Co-first author Michele Nardin is a second-year PhD student in the Csicsvari lab.