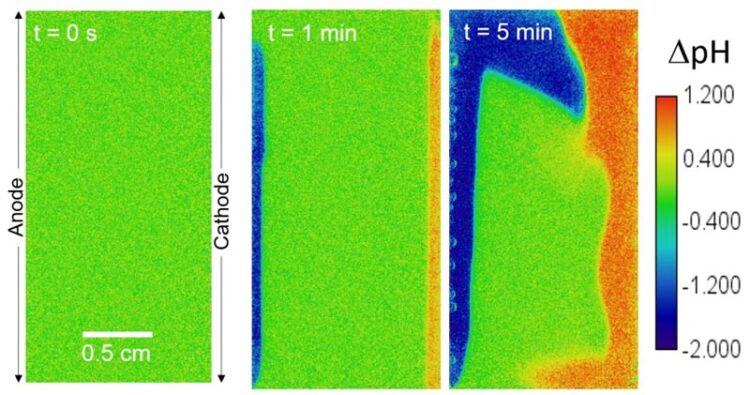 The distribution of local pH change (ΔpH) with time in an electrolyte containing 0.5 M K2SO4. © HZB

Hydrogen can be produced with renewable energies in a climate neutral way and could make a major contribution to the energy system of the future. One of the options is to use sunlight for electrolytic water splitting, either indirectly by coupling a solar cell with an electrolyser or directly in a photoelectrochemical (PEC) cell. Light-absorbing semiconductors serve as photoelectrodes. They are immersed in an electrolyte solution of water mixed with strong acids or bases, which contains high concentration of protons or hydroxide ions necessary for efficient electrolysis.

However, in a large-scale plant, it would make sense for safety reasons to use an electrolyte solution with a near-neutral pH. Such a solution has a low concentration of protons and hydroxide ions, which leads to mass-transport limitations and poor performance. Understanding these limitations is essential to design a safe and scalable PEC water splitting device.

A team led by Dr. Fatwa Abdi from the HZB Institute for Solar Fuels has now for the first time investigated how the liquid electrolyte throughout the cell behaves during electrolysis: With the help of fluorescent pH-sensor foils, Dr. Keisuke Obata, a postdoc in Abdi’s team, determined the local pH value in PEC cells between the anode and cathode during the course of electrolysis. The PEC cells were filled with near-neutral pH electrolytes. The scientists experimentally visualized the decrease of pH at regions close to the anode and the increase of pH at regions close to the cathode. Interestingly, they observed a clock-wise motion of the electrolyte as the electrolysis proceeds. The observation can be explained by buoyancy due to changes of electrolyte density during the electrochemical reaction which leads to convection. “It was surprising to see that tiny changes in electrolyte density (~0.1%) cause this buoyancy effect,” says Abdi.

In parallel, Abdi and his team developed a multiphysics model to calculate the convection induced by electrochemical reactions. “We have thoroughly tested this model and can provide now a powerful tool to simulate natural convection in an electrochemical cell with various electrolytes in advance,” says Abdi.

For the project Abdi has built up a “Solar Fuel Devices Facility” at HZB, which is part of the Helmholtz Energy Materials Foundry (HEMF), a big infrastructure open to other scientists as well. This study was also performed in collaboration with TU Berlin, within the framework of UniSysCat cluster of excellence.

“With this work we are expanding our materials science expertise with efforts on photoelectrochemical reactor engineering, which is an essential next step for the scale-up of solar fuel devices” says Prof. Dr. Roel van de Krol, who heads the HZB Institute for Solar Fuels. 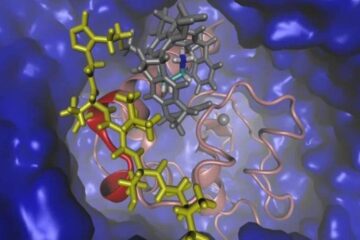 It is called the “survival protein” because it plays a central role in the growth of cancer cells: survivin influences two important processes in the body’s cells at the same…