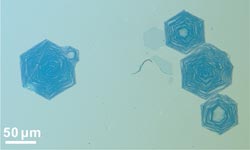 This set of hexagonal graphene “onion rings” was grown at Rice University. The rings represent the first example of graphene nanoribbons grown from the bottom up – that is, atom by atom – via chemical vapor deposition. (Credit: Tour Group/Rice University)

Concentric hexagons of graphene grown in a furnace at Rice University represent the first time anyone has synthesized graphene nanoribbons on metal from the bottom up — atom by atom.

As seen under a microscope, the layers brought onions to mind, said Rice chemist James Tour, until a colleague suggested flat graphene could never be like an onion.

The name stuck, and the remarkable rings that chemists marveled were even possible are described in a new paper in the Journal of the American Chemical Society.

The challenge was to figure out how such a thing could grow, Tour said. Usually, graphene grown in a hot furnace by chemical vapor deposition starts on a seed — a speck of dust or a bump on a copper or other metallic surface. One carbon atom latches onto the seed in a process called nucleation and others follow to form the familiar chicken-wire grid.

Experiments in Tour’s lab to see how graphene grows under high pressure and in a hydrogen-rich environment produced the first rings. Under those conditions, Tour, Rice theoretical physicist Boris Yakobson and their teams found that the entire edge of a fast-growing sheet of graphene becomes a nucleation site when hydrogenated. The edge lets carbon atoms get under the graphene skin, where they start a new sheet.

But because the top graphene grows so fast, it eventually halts the flow of carbon atoms to the new sheet underneath. The bottom stops growing, leaving a graphene ring. Then the process repeats.

“The mechanism relies on that top layer to stop carbon from reaching the bottom so easily,” Tour said. “What we get are a multiple of single crystals growing one on top of the other.”

The Tour lab pioneered the bulk manufacture of single-atom-thick graphene nanoribbons in 2009 with the discovery that carbon nanotubes could be chemically “unzipped” into long, thin sheets. Nanoribbons are being studied for use in batteries and advanced electronics and as heat sinks.

“Usually you make a ribbon by taking a large thing and cutting it down,” Tour said. “But if you can grow a ribbon from the bottom up, you could have control of the edges.” The atomic configuration at the edge helps determine graphene’s electrical properties. The edges of hexagonal graphene onion rings are zigzags, which make the rings metallic.

“The big news here,” he said, “is that we can change relative pressures of the growth environment of hydrogen versus carbon and get entirely new structures. This is dramatically different from regular graphene.”

Graduate student Zheng Yan, a member of Tour’s lab and lead author of the paper, discovered the new route to nanoribbons while experimenting with graphene growth under hydrogen pressurized to varying degrees. The sweet spot for rings was at 500 Torr, he said.

Further testing found the microscopic rings formed underneath and not on top of the sheet, and Yakobson’s lab confirmed the growth mechanism through first-principle calculations. Yan also determined the top sheet of graphene could be stripped away with argon plasma, leaving stand-alone rings.

The width of the rings, which ranged from 10 to 450 nanometers, also affects their electronic properties, so finding a way to control it will be one focus of continued research, Tour said. “If we can consistently make 10-nanometer ribbons, we can begin to gate them and turn them into low-voltage transistors,” he said. They may also be suitable for lithium storage for advanced lithium ion batteries, he said.