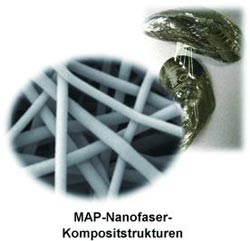 It’s not just what’s inside the cell that counts; its surroundings are important too. For example, the extracellular matrix plays an important role in connective tissue and cartilage, as well as the growth and regeneration of bones. In order to culture tissue in the laboratory, it is also necessary to have a scaffolding that imitates the natural extracellular matrix.

In the journal Angewandte Chemie, a team led by Hyung Joon Cha at the Pohang University of Science and Technology (South Korea) has now introduced a novel substrate: a hybrid made of synthetic nanofibers and an “adhesive” from marine mussels, to which cells can simply be “glued”.

It is important to imitate the fibrous structure of the extracellular matrix, but that is not enough to get the cells to grow onto it. The fibers must have a surface with the right biological functionality. To achieve this, biomolecules from the extracellular matrix are usually attached to synthetic nanofibers—often by way of some highly complicated procedures. A simple, universal technique would be desirable, and the Korean team now seems to have succeeded in finding one—thanks to a special mussel adhesive.

Marine mussels excrete an adhesive protein in order to attach themselves to surfaces in water. This adhesive reliably binds them to nearly all materials: stones, other shells, boardwalks, the hulls of ships. It is thus an ideal universal adhesive. It has now become possible to use genetically modified bacteria to massively produce a mussel adhesive protein.

The Korean researchers used an electrospinning process to produce nanofibers of this mussel adhesive, though these fibers were not a sufficiently solid substrate for cell culture. When spun together in the right proportions with a biocompatible synthetic polymer, however, they formed fibers with good mechanical properties. The synthetic polymer forms the backbone of the fibers, while the mussel adhesive attaches to the nanofibers, making their surface “sticky”. Biomolecules such as proteins, DNA, and carbohydrates stick to it firmly to form an even coat—just dip the fibers into a solution of the desired substance.

Cells also stick to this fibrous substrate very well, as demonstrated with precursor bone-forming cells. The cells attach to the mussel adhesive/polymer nanofibers, spread out, and multiply. This works even better if the mussel adhesive fusion protein also contains a special cell-recognition sequence, thus making the novel mussel-adhesive-containing nanofibers an interesting substrate for tissue culture applications.