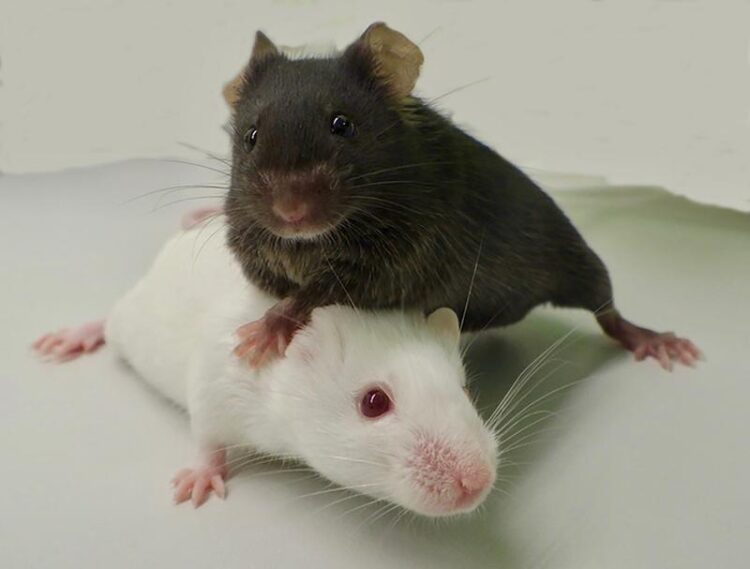 The interplay of many individual genetic variants defines the impact of carcinogenic mutations. Random genetic changes in cancer genes can trigger tumors. However, whether they actually lead to the disease is determined by a large number of genes. A Berlin research team has now shown this in mice.

It seems paradoxical: there are heavy smokers who stay healthy throughout their lives, while others take great care of their health and eventually develop cancer nonetheless. Does this mean that it is purely coincidental whether someone gets cancer or not? Not really: people who inherited “good” genes from their parents could remain healthy although they carry cancer mutations.

Cancer risk depends on many genes

Every tumor originates from a mutation caused by toxins, viruses, radiation or just random errors happening during the duplication of the DNA before each cell division. If such genetic alterations occur in cancer genes, i.e. in genes that regulate cell growth or division, these processes can get out of control and cause tumors to grow.

The extent to which a mutation in a cancer gene penetrates the natural safeguards of a cell and actually causes tumors depends largely on the combination of numerous genetic variants of an organism. A Berlin research team from the Max Planck Institute for Molecular Genetics and the Charité – Universitätsmedizin Berlin has investigated the role of this “genetic background” on the example of colorectal cancer in mice and has now presented the results in the journal Cancer Research. According to the study, genes distributed throughout the entire genome influence how well a cell can compensate for the damaging effect of a mutation in a cancer gene.

By comparing two different strains of laboratory mice, examining individual chromosomes and gene activity in affected tissues, the research team identified multiple genetic variants that influence the cancer risk in mice. These include genes that also control cell division and growth in humans and play an important role in embryonic development and tissue homeostasis in the intestine. Distributed over a single chromosome, the team was able to identify 58 genes, which are transcribed to different extents in the two mouse strains.

The study was conducted under the direction of Bernhard G. Herrmann, Director at the Max Planck Institute for Molecular Genetics (MPIMG) and the Institute for Medical Genetics at Charité – Universitätsmedizin Berlin, and Markus Morkel, scientist at the Institute of Pathology at Charité and former member of the Herrmann research group.

“The genome of every person consists of a unique combination of many thousands of gene variants that determine our individual characteristics and abilities,” says Herrmann. “We therefore suspect that these gene variants also influence different susceptibility to disease, as in this case the development of tumors in response to a tumor-driving mutation.”

For their study, Herrmann and Morkel’s team compared laboratory mice from the rather cancer-prone inbred strain “Black-6” with those from the strain “PWD”. “The mice are descended from different subspecies of the common house mouse and show thousands of genetic differences,” says Alexandra Farrall, one of the two lead authors of the work.

The researchers investigated how the animals reacted to a mutation in the tumor suppressor gene APC, which is responsible for 80 percent of colon cancer cases in humans. In mice and humans, the mutation leads to the formation of adenomas, which are growths in the intestine that can become malignant over time. In the intestines of the Black 6 mice with the mutation, more than a hundred adenomas had formed by the time the mice reached three months of age.

When the researchers crossed Black 6 mice with animals of the PWD strain, the offspring developed less than ten polyps despite the presence of the harmful APC mutation. “In effect, the genome of the PWD mice largely prevented the mutation in the APC gene from inducing tumors,” says Farrall.

But what are the factors that protected the mice from the formation of adenomas? To find out, the research team replaced individual chromosomes of the Black 6 mice with chromosomes from the PWD mouse. “Almost all of the PWD chromosomes that we tested significantly reduced the risk of cancer in the mice, although not as much as the entire genome,” says Matthias Lienhard, who is the other lead author.

The researchers then focused on chromosome 5. “There were DNA sections that significantly reduced the cancer risk spread over the entire chromosome,” says Lienhard. As the scientists found, the expression level of most of these genes on chromosome 5 also remained stable in the adenoma tissue, which allows them to counteract the tumor-driving mechanisms triggered by the loss of APC. The genes also did not differ significantly between parents and their offspring, suggesting that the protective effect against cancer was hereditary.

“The gene variants of the PWD strain particularly affected the stem cells in the intestine by attenuating the growth-promoting effect of the APC mutation,” said Morkel. “They probably also lead to malignant stem cells being rejected by the tissue at an early stage, so that an adenoma cannot develop in the first place.”

When comparing the gene variants found on mouse chromosome 5 with the genomes of patients with colorectal cancer, the researchers found eight gene variants that are strongly underrepresented in this group of people. This suggests that in humans, these gene variants could have a preventive influence against colon cancer formation.

“Our study provides evidence that the genetic make-up of an individual can keep in check even strong cancer-triggering gene mutations and that this has a decisive influence on the individual’s cancer risk,” says Herrmann.

“Single genetic variants probably have only minor effects individually and have therefore presumably not yet been discovered in association studies in humans,” says Morkel. “But in combination, they create a robust protection against cancer.”

The scientists call for a stronger focus on genomic tumor-protective mechanisms in future cancer research and hope their findings enable new strategies for improved individualized cancer prevention and treatment.

http://Press release at the site of the MPI for Molecular Genetics – https://www.molgen.mpg.de/4327262/news_publication_15980453_transferred