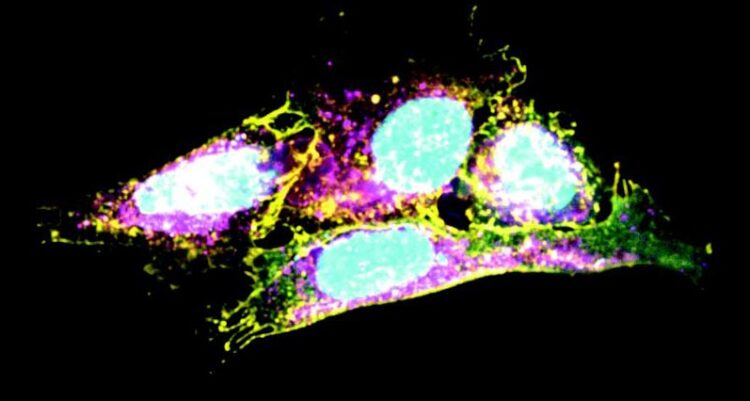 The image shows cells in which Creld1 was labeled with a yellow dye to show their localization in the cell.
Dr. Lorenzo Bonaguro

A genetic disposition that plays a role in the development of the heart in the embryo also appears to play a key role in the human immune system. This is shown by a recent study led by the University of Bonn.

A genetic disposition that plays a role in the development of the heart in the embryo also appears to play a key role in the human immune system. This is shown by a recent study led by the University of Bonn. When the gene is not active enough, the immune defense system undergoes characteristic changes, causing it to lose its effectiveness. Doctors speak of an aging immune system, as a similar effect can often be observed in older people. In the medium term, the results may contribute to reduce these age-related losses. The study is published in the journal Nature Immunology.

The gene with the cryptic abbreviation CRELD1 has so far been a mystery to science. It was known to play an important role in the development of the heart in the embryo. However, CRELD1 remains active after birth: Studies show that it is regularly produced in practically all cells of the body. For what purpose, however, was previously completely unknown.

The Bonn researchers used a novel approach to answer this question. Nowadays, scientific studies with human participants often include so-called transcriptome analyses. By these means, one can determine which genes are active to what extent in the respective test subjects. Researchers are also increasingly making the data they obtain available to colleagues, who can then use it to work on completely different matters. “And this is exactly what we did in our study,” says Dr. Anna Aschenbrenner from the LIMES Institute at the University of Bonn and member of the ImmunoSensation² Cluster of Excellence.

Aschenbrenner is doing her habilitation in the Genomics and Immunoregulation team of Prof. Dr. Joachim Schultze. Together with her colleagues, she combined transcriptome data from three different studies. “This provided us with information on the activity of the genetic material, including the CRELD1 gene, of a total of 4,500 test subjects,” she explains. “In addition, the data for these participants also included information on certain immunological parameters, such as the number of different immune cells in their blood.”

CRELD1 is less active in some people

The researchers discovered a surprising correlation when analyzing this information: The 4,500 analyzed test subjects included some in whom the CRELD1 gene was significantly less active for some reason. Interestingly, the blood of these donors was found to contain only very few of the so-called T cells. These cells play an important role in fighting infections; some of them detect virus-infected cells and kill them before they can infect other cells.

The researchers further investigated this relationship in mouse experiments. The results showed that the genetic loss of the Creld1 gene was indeed the cause for the loss of T cells. T cells lacking the Creld1 gene largely lose their ability to propagate and die earlier. “We see similar changes in people with an ‘aged’ immune system,” Aschenbrenner stresses. This phenomenon, also called immunosenescence, is mainly observed in older people. Those affected are much more susceptible to infections, as currently discussed in the context of COVID-19, but possibly also to age-related diseases such as cancer or Alzheimer’s. It is known that the activity of numerous genes in the blood is altered in a characteristic way, which experts also refer to as an immunological aging signature. “We found precisely this signature among participants with low CRELD1 activity,” says Aschenbrenner.

Centenarians with a young immune system

Surprisingly, some people’s immune system ages much faster than others. For instance, there are centenarians who, immunologically speaking, are several decades younger. With others, the power of the body’s own disease defense system already diminishes significantly in the middle of life. The researchers now hope that CRELD1 will provide them with a key to better understand the causes of immunological aging. “The long-term goal is to slow down or halt this process,” explains Aschenbrenner. “This could perhaps significantly reduce the risk of illness in seniors.”

In addition to the University of Bonn, the German Centre for Neurodegenerative Diseases in Bonn, the Radboud University Medical Center in Nijmegen (Netherlands), the Université de Liège (Belgium), the Hannover Medical School and the Helmholtz Centre for Infection Research in Braunschweig (both Germany) were involved in the study.

The study received financial support by the LIMES Institute at the University of Bonn, the ImmunoSensation² Cluster of Excellence at the University of Bonn, the International Research and Training Group ” Myeloid Antigen Presenting Cells and the Induction of Adaptive Immunity” of the Universities of Bonn and Melbourne and the Collaborative Research Center 704 “Molecular mechanisms and chemical modulation of local immune regulation”, funded by the German Research Foundation.

Harmful protein waste in the muscle