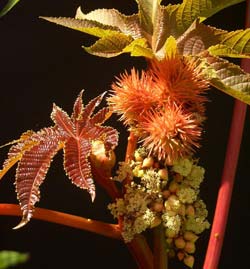 The flower of the castor oil plant Ricinus communis. Scientists at the Max Planck Institute for Heart and Lung Research have now unravelled the mysteries of the action mechanism of what is regarded as one of the oldest drugs known to man.<br>© Richard Drew / Dreamstime.com<br>

Castor oil is known primarily as an effective laxative; however, it was also used in ancient times with pregnant women to induce labour. Only now have scientists at the Max Planck Institute for Heart and Lung Research succeeded in unravelling the mysteries of the action mechanism. A receptor by the name of EP3 on the cells of the intestine and uterus is apparently responsible. This is activated by an ingredient in the oil.

The oil obtained from the seeds of the castor oil plant Ricinus communis is one of the oldest drugs known to man. The first mention of it as a laxative can be found in 3500-year-old Ancient Egyptian papyrus scrolls. Castor oil was also used for medical purposes in Greek and Roman times. And for many centuries, it has also been used to induce labour. Yet despite being used worldwide in conventional and folk medicine, until now it has not been clear how castor oil’s laxative and labour-inducing effects actually work.

Scientists working with Stefan Offermanns and Sorin Tunaru at the Max Planck Institute for Heart and Lung Research in Bad Nauheim have now revealed the long-held secret: “It has been known for many years that a certain ingredient, namely ricinoleic acid released from the oil in the intestine, is responsible for the effect. However, until now it was assumed that this acted via a local irritation of the intestinal mucosa. We have now been able to show that it is actually a pharmacological effect”, said Sorin Tunaru who headed the research project.

The focus of Stefan Offermanns’ department is the so-called G protein-coupled receptors, a large group of receptors in the body involved primarily in transmitting signals in cells. Sorin Tunaru had initially found effects that are characteristic of these receptors in an experiment with ricinoleic acid on various cell cultures. Following this, the researchers at Bad Nauheim began a more detailed investigation. Hundreds of receptors were systematically turned off, and then the reaction of the cells to ricinoleic acid tested. Ultimately, they succeeded in identifying the key receptor with the name EP3.

“Experiments with mice in which the EP3 receptor had previously been specifically turned off by a genetic operation provided us with convincing proof”, explains Sorin Tunaru. “Unlike their genetically unchanged fellow species, after being given castor oil or even just ricinoleic acid, the mice without the EP3 receptor exhibited no increased defecation.” And in pregnant animals, no increased labour was found, which suggests that in both cases the EP3 receptor is responsible.

The Max Planck scientists concluded from this that after being released from the castor oil, the ricinoleic acid is first of all absorbed by the body via the intestinal mucosa; the EP3 receptor then becomes active on the muscle cells of the intestine and uterus, which in turn stimulates intestinal activity and labour.

In Stefan Offermanns’ opinion, the light shed on the action mechanism of this old drug could lead to a reassessment of its clinical use. “Castor oil is still widely used in alternative and folk medicine. However, in conventional medicine it has been decreasingly propagated in the last few decades, not least because the action mechanism was unclear. The results of our study could be a factor in this changing again.”

There is also the hope that for the synthetic active ingredients already used today new areas of application will open up. For example, today, substances are also used which we have identified for the ricinoleic acid that activate the responsible receptor to increase labour. It is conceivable that mild-action drugs could be developed from these substances to cleanse the intestine or promote intestinal activity. At any rate, however, one thing is certain for the scientists: many of the natural remedies used in medicine ultimately develop their action via specific, molecularly-defined mechanisms just like synthetically produced medicines.