Fungal infections: systemic suppression of the immune system of wheat 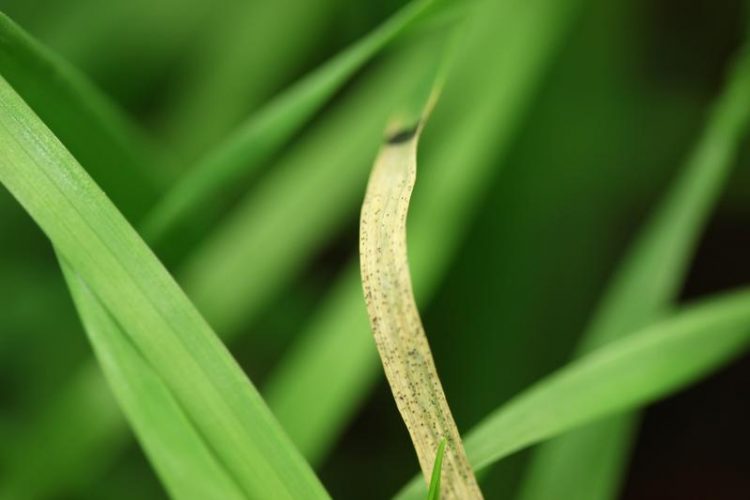 Pycnidia, the fungal fruiting bodies, on a wheat leaf in an infection experiment: Counting them helps to determine fungal performance and ability to infect the plant. © Dr Amine Hassani

Wheat is one of the most important crops worldwide, and is the main ingredient of many staple foods. As the world's second most extensively cultivated cereal crop, approximately 20-25 million tons of wheat are produced per year in Germany alone.

However, in north-western Europe, wheat production is confronted with the harmful fungus Zymoseptoria tritici, which attacks the wheat leaves and can cause serious harvest losses of up to 50 percent. Chemicals used by farmers to protect wheat against this fungus is responsible for approximately 70 percent of the total plant protection products used in Germany – and it thereby represents a major challenge to food security.

On the one hand, researchers are working to breed resistant species, and on the other hand, they are developing innovative and sustainable plant protection strategies in order to keep the fungus in check. At Kiel University, the Environmental Genomics group led by Professor Eva Stukenbrock explores the molecular interactions of plant and fungus, and the resulting mutual evolutionary adaptations, among other topics.

In this regard, the Kiel research team has now published a study, with support from the Canadian Institute for Advanced Research (CIFAR) and the Collaborative Research Centre (CRC) 1182 “Origin and Function of Metaorganisms” at Kiel University, among others, which investigates the mechanism of fungal infection in wheat, particularly in terms of the impact of the pathogen on the plant’s immune system.

The researchers were able to show that the fungus influences the plant metabolism, changes the composition of the wheat microbiome, and furthermore that localised Z. tritici infection leads to a systemic suppression of the plant’s immune system, which makes further colonisation by the pathogen easier. The scientists published their paper today in the renowned journal Nature Communications.

The Kiel scientists investigated the mechanisms of fungal infection using two different varieties of wheat: one which is susceptible to the fungus, and one which is resistant. In doing so, they concentrated on changes in the plant’s metabolism. In response to the fungus, the resistant plants produce antifungal metabolites, which inhibit the growth of the fungus.

In addition, they produce certain substances that strengthen the cell walls of the plant cells. This makes penetration by the fungus more difficult, and helps to fight the infection. However, these mechanisms are manipulated in the susceptible wheat plants. These are unable to produce antifungal metabolites and there is no reinforcement of the cell walls during the invasion of Z. tritici.

“Interestingly, these effects are not limited to the site of infection,” said Dr Heike Seybold, a former post-doctoral researcher in Stukenbrock's working group and currently a scientist at the Hebrew University of Jerusalem. “We were able to show that during the course of the fungal infection, there is a systemic suppression of the immune system in certain varieties of wheat, and suspect that the fungus can cause this effect,” added Seybold.

These processes can be understood based on the microbial colonisation of the wheat plant: after contact with the fungus, there are changes in the quantity and composition of the microorganisms present in the plant microbiome. “With the fungus-resistant variety, the diversity of species in the microbiome decreases as soon as the plant is infected,” explained Seybold.

“This means that especially the core microbiome species remain, while the immune response is increased,” added Seybold. The researchers suspect that this effect is based on an evolutionary adaptation of the plant to the pathogen. In the susceptible wheat variety, the effect is accordingly not pronounced.

A fungal infection in resistant plants thus causes colonisation of the microbiome by certain organisms to be prevented, and its overall composition is changed from a functional perspective, in order to fight the infection.

In a follow-up step, the researchers studied how these changes affect the susceptibility of the plants to other pathogenic organisms, for example certain harmful species of bacteria. When they initially took wheat plants that were not infected with the fungus, and infected them with the bacteria, the bacteria grew equally well in both wheat varieties, the resistant and the susceptible.

“Differences in the growth of bacteria only appear if you infect both varieties with Z. tritici and the bacteria at the same time, but in separate parts of the plant,” explained Seybold. In this case, the resistant variety was able to ward off both the fungus and the bacteria.

In contrast, the variety, which is susceptible to the fungus was even more vulnerable to the bacteria than before. “This underlines the fact that the fungus is able to suppress the immune system of the wheat overall – regardless of where the infection occurs,” continued Seybold.

The value of transdisciplinary cooperation

The new results of the CAU researchers are the product of extensive cooperation between various areas of expertise: the plant researchers at the Botanical Institute cooperated with experts for genome sequencing and specialists for the analysis of metabolic data in so-called metabolomics research – namely in Professor Andre Frankes Genetics and Bioinformatics Group at the Institute for Molecular Biosciences and the Department for Food Technology led by Professor Karin Schwarz at Institute of Human Nutrition and Food Science, both at Kiel University. It’s only through this joint effort that they succeeded in gaining valuable new insights into the interactions between crops and pathogens from three complementary scientific perspectives.

“Our new transdisciplinary study is of great importance for further research into sustainable plant protection strategies,” emphasised Stukenbrock, spokesperson of the Kiel Plant Center (KPC) at Kiel University for plant research. “We were able to show for the first time how a plant pathogen triggers a systemic immune response in crop plants, and can thus cause increased susceptibility to other harmful organisms,” added Stukenbrock. As a result, an additional important facet of fundamental research is now known, which in future can be used to develop new protection strategies for crop production.

https://www.uni-kiel.de/de/pressemitteilungen/2020/108-seybold-naturecomms-leave…
Caption: Pycnidia, the fungal fruiting bodies, on a wheat leaf in an infection experiment: Counting them helps to determine fungal performance and ability to infect the plant.
© Amine Hassani

https://www.uni-kiel.de/de/pressemitteilungen/2020/108-seybold-naturecomms-cultu…
Caption: Plates with Pseudomonas bacteria isolated from wheat after previous infection help to determine the amount of bacteria growing inside the plant.
© Dr Heike Seybold