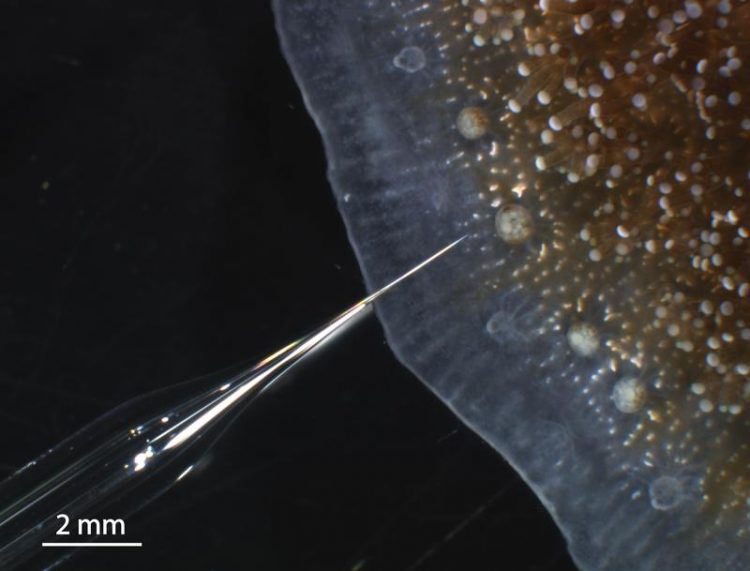 Researchers from the Centre Scientifique de Monaco (CSM), the Max Planck Institute for Marine Microbiology in Bremen and the University of Kiel have succeeded in directly measuring three key parameters necessary for skeleton formation in a live tropical coral.

This way, they completely characterized the carbonate chemistry at the site of calcification. The study has now been published in Science Advances.

Coral reefs are made up of massive calcium carbonate skeletons. The present study, published in Science Advances on January 16th 2019, reveals insights into the process of calcification, namely the process that leads to the formation of these skeletons.

Elucidating coral calcification is key to a deeper understanding and better predictions of how and why coral reefs respond to environmental changes, such as ocean acidification.

“By combining microscopy and microsensor measurements, we were able to directly measure calcium, carbonate and pH at the site of calcification in coral microcolonies of Stylophora pistillata and derive important carbonate chemistry parameters from it. We show that all measured and derived parameters are higher at the coral than in the surrounding seawater.

This points to the importance of calcium and carbon concentrating mechanisms that are actively regulated by the coral to form its skeleton,” says lead author Duygu Sevilgen, scientist at the CSM and former PhD-student at the Max-Planck-Institute for Marine Microbiology.

Measuring these key parameters at the site of calcification in live coral samples (where the first crystals are formed before they fuse to build the massive skeleton) is technically highly challenging. Previous studies using microelectrodes have been carried out “blind” and were hampered by uncertainty over correct placement of the microelectrodes in the calcifying medium.

As such, most of today’s knowledge is based on geochemical signatures in dead skeletons, rather than measurements in live corals. Sevilgen and her colleagues overcame these difficulties by using in vivo microscopy to orientate the microelectrodes into the calcifying medium, minimizing disturbance to coral physiology. “Since many years, one of our strengths at the CSM has been to culture corals under controlled conditions and develop cutting edge techniques to analyse the physiology of living corals”, says Sylvie Tambutté, research director at the CSM.

Alexander Venn, senior scientist at the CSM, further explains: “Lots of important data on the calcifying fluid are available in the literature on corals. However, values obtained by different methods show great variability. As a first step in our study, we combined two methods to measure pH (a pH sensitive fluorescent dye and pH microsensors) and optically verified that we measure at the same spot and at the same time.

By doing this we could show that when measured at the same time and place, methods indeed agree, clarifying differences in previous findings. This highlights the usefulness and importance of optical verification during the use of microsensors to ensure proper placement within the coral.”

The study presents important insights that are relevant for future microsensor and modeling approaches addressing the carbonate chemistry and dynamics during carbonate crystal formation in corals.

The work was funded by the Government of the Principality of Monaco.

For the first time, a special microsensor developed in cooperation with the University of Kiel was used to measure the carbonate concentration in areas just a few micrometers in size. “Through our precise measurement using specially developed microsensors, we were able to make a decisive contribution to determining the carbonate chemistry at the site of skeleton growth. These new findings lay an important basis for future research concerning coral adaptation mechanisms in acid marine environments,” says Marian Hu from the Institute of Physiology at Kiel University.

Joint Press release of the Centre Scientifique de Monaco (CSM), the Max Planck Institute for Marine Microbiology in Bremen and the University of Kiel (CAU).