Fruit flies farm their own probiotics 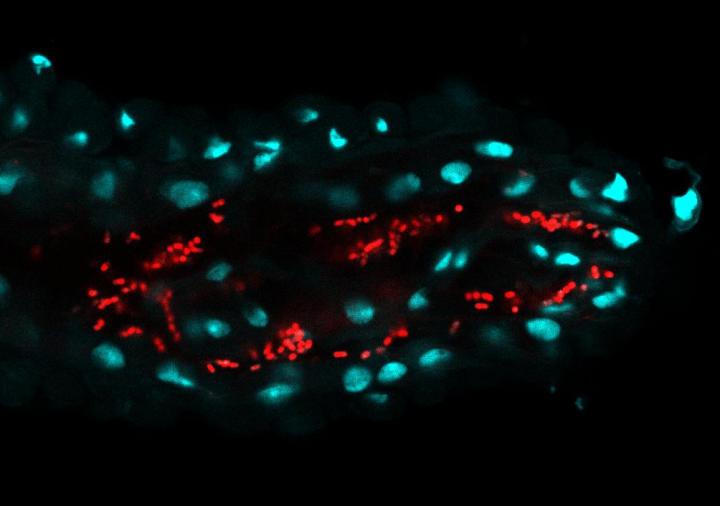 This is a microscopic image of beneficial bacteria associated with fruit flies' anterior gut. The nuclei of fly's cells are stained in blue and bacteria are stained in red. Credit: Inês Pais and Rita Valente Usage Restrictions: This image can only be used to illustrate this news item.

Now, a study published in the PLoS Biology offers a new tool to study this bacteria-host interaction. A research team from the Gulbenkian Institute of Science (IGC) revealed how the bacterial community colonizes the fruit flies kept in the lab or in the wild, and which may be the impact of this colonization in nature. Understanding these mechanisms of colonization may allow microbiota manipulation in insects responsible for agriculture pests or diseases vectors.

It was assumed, until recently, that the fruit fly (scientific name, Drosophila melanogaster) did not have a stable bacterial community in its intestine. Gut bacteria would need to be continuously ingested with food. A research team led by Ines Pais, researcher at Luis Teixeira's lab from IGC, showed now that fruit flies have a bacterial community much more stable than it was believed.

But there are differences between flies kept in the laboratory and from the wild. Laboratory flies – globally used in research studies – are associated with bacteria not able to colonize the intestine. Instead, these bacteria grow in the flies' food and are constantly ingested by them. The IGC team discovered a very different situation related to wild flies, which exist in nature.

They showed that bacteria associated to wild flies have a much higher colonization capability. Curiously, these wild flies' bacteria are able to colonize the intestines of flies kept in the lab. By focusing in one of these bacteria, the researchers showed that a stable and continuously colonization of the intestine causes a constant transfer of bacteria to the environment, benefiting the following generation.

“The fruit fly practices a kind of farming by transporting with them the bacteria that are sown in the local where the next generation will grow and feed. Doing so, the next generation of flies will obtain all the benefits related to these bacteria for their development and fertility”, explains Ines Pais. “This interaction is also similar to what happens when human beings use yeast to bake bread, or bacteria to make yogurt”, adds Luis Teixeira, principal investigator of the research group.

On why fruit flies were used to study the way that bacteria colonize the intestine, Luís Teixeira says: “The bacterial community in fruit flies is much smaller and simple than in mammals. Also, it is a relatively easy to produce fruit flies without any bacteria, which facilitates the study of colonization. Since similar biological mechanisms exist between the fruit fly and humans, we think that there are many lessons that we can learn with the fly”. The researcher alerts also for the fact that many insects have a devastating role in agriculture or as diseases vectors. “Through the manipulation of their microbiota it might be possible to control these insects or their capability to transmit diseases, as for example Dengue virus and malaria parasites”, says Luís Teixeira.

This study was conducted at the Gulbenkian Institute of Science and funded by Fundação para a Ciência e Tecnologia, University of Gdansk and European Union, and FEDER.

The bacteria in our body

We all live in permanent contact with a huge community of microorganisms, such as bacteria, virus, and fungus. We have different communities on our body's surface and mucous. The biggest and most diverse bacteria community in terms of bacteria species is placed in the intestine. In normal conditions, the microbiota is in balance, providing benefits to the host organism. Our bacteria promote the correct development of our body, the break down of nutrients and protect our body against some pathogens, which can, for example, cause intestine infections. However, when this balance is disturbed (for example, by using antibiotics), the microbiota species may change. The organism passes through a dysbiosis condition, in which this community, instead of beneficial, may become harmful to our health.