Forward or backward? New pathways for protons in water or methanol 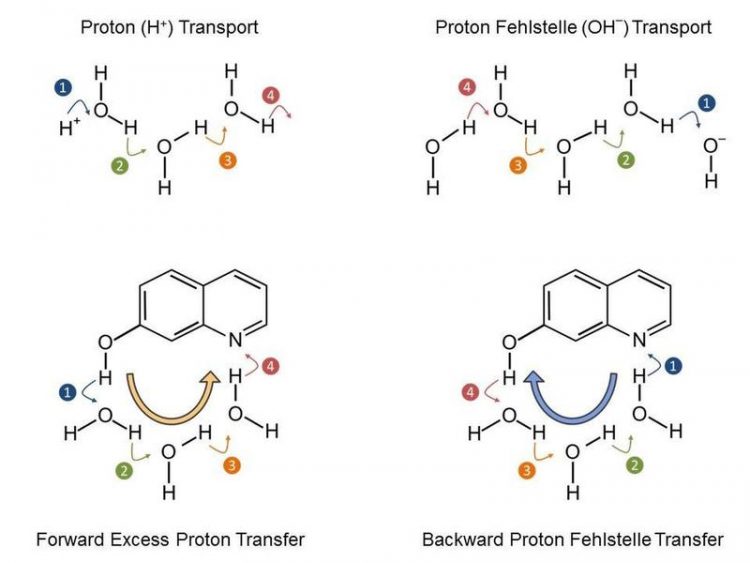 Proton transport in water, in which the excess H+ or OH- charge moves in steps. With the model system 7-hydroxyquinoline it is possible to define the direction of the charge transport. Credit: MBI

The exchange of protons between two chemical groups (acid-base neutralization) is a textbook chemistry problem for many years. Surprisingly, up to this date new fundamental insight about the elementary steps of proton transport is being obtained.

This may well lie in the fact that the elementary steps (by protons or proton vacancies) take place on extremely short time scales, that are not accessible with conventional laboratory techniques (Figure 1).

Observation of these elementary reaction steps, as achieved by the research teams of MBI and MLU thus requires direct access to time scales of 1-100 picoseconds (0.000000000001 until 0.0000000001 seconds), necessitating an experimental set-up with an accordingly high time resolution as well as high performance computer systems.

The research teams have jointly studied a particular model system (7-hydroxyquinoline in water/methanol mixtures), where an ultrashort laser pulse triggers the deprotonation of an OH-group and the protonation of a nitrogen atom.

The precise chronology of the elementary steps with these class of chemical reactions have remained elusive, leading to numerous speculations.

The scientists of the MBI and MLU have now been able to determine that the release of a proton from the OH-group to the solvent is indeed ultrafast, yet the pick-up of a proton by the nitrogen atom is even faster.

This results in a transport mechanism of proton vacancies, i.e. of hydroxide/methoxide ions. The elementary reaction steps have been elucidated with time-resolved IR spectra and detailed quantum chemical calculations (see Figure 2).