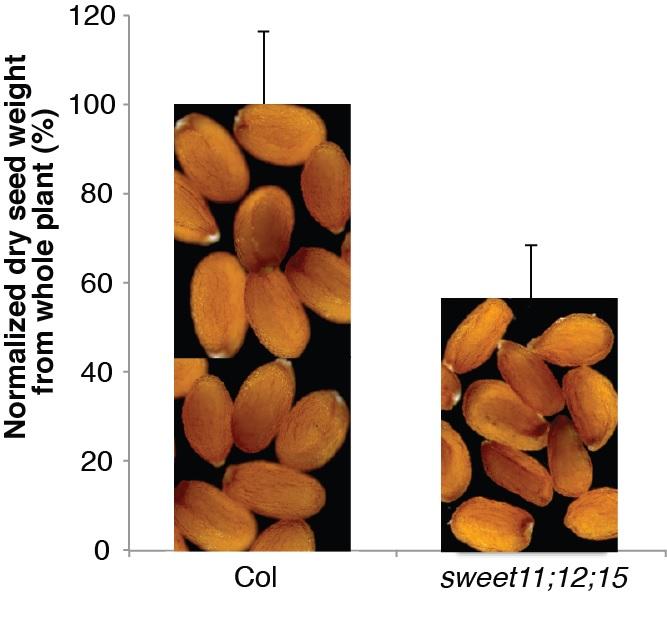 A comparison of normal seeds and seeds lacking SWEETS 11, 12, and 15, which are wrinkled (similar to those Mendel used to track down the basic rules of genetics). Embryonic development is clearly retarded in these mutants because they are unable to move sugars from the seed's coat to the embryo inside. Credit: Wolf Frommer and Li-Qing Chen

New work from a team led by Carnegie's Wolf Frommer identifies biochemical pathways necessary for stocking the seed's food supplies. These findings could be targeted when engineering crops for higher yields.

Published in The Plant Cell, the research identifies three members of the SWEET family of sugar-transport proteins that are used to deliver the sugars that are produced in the plant's leaves to the embryonic plant inside of a seed.

Frommer's lab has done extensive work on SWEET proteins, which have an array of functions in plants including nectar secretion. SWEET transporters are also vulnerable to takeover by pathogens, which thereby hijack the plant's food and energy supplies.

The research team–Carnegie's Li-Quing Chen, I Winnie Lin, Xiao-Qing Qu, Davide Sosso, and Alejandra Loñdono, as well as Heather McFarlane and A. Lacey Samuels from the University of British Columbia–found that SWEETS 11, 12, and 15 funnel sucrose toward the developing plant embryos through multiple pathways.

Specially created mutants that eliminate these three SWEET transporters show wrinkled seeds similar to those Mendel used to track down the basic rules of genetics. Embryonic development is clearly retarded in these mutants because they are unable to move sugars from the seed's coat to the embryo inside.

This work was funded by the Department of Energy and the Carnegie Institution of Canada.

The Carnegie Institution for Science is a private, nonprofit organization headquartered in Washington, D.C., with six research departments throughout the U.S. Since its founding in 1902, the Carnegie Institution has been a pioneering force in basic scientific research. Carnegie scientists are leaders in plant biology, developmental biology, astronomy, materials science, global ecology, and Earth and planetary science.