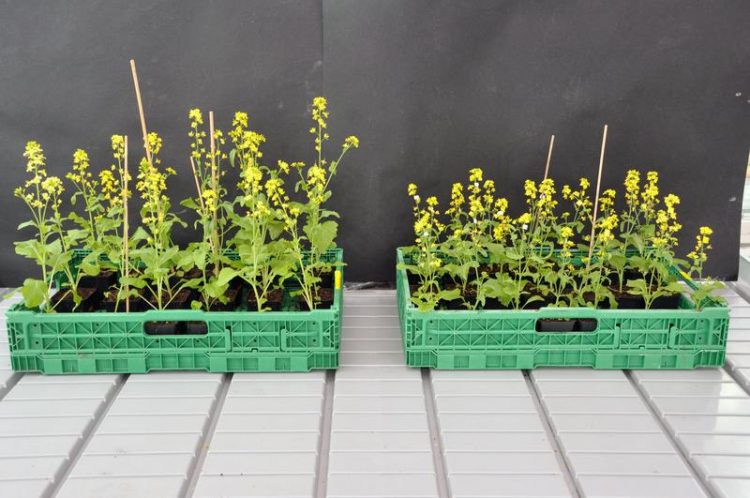 Not much plant sex happens without pollinator insects: Bees, flies or butterflies transfer the male pollen grains to the stigma of a plant’s female style, thereby ensuring its sexual reproduction. Researchers from the Department of Systematic and Evolutionary Botany at the University of Zurich now reveal that pollinator insects also have a surprisingly strong influence on plant evolution.

For their experiment, UZH professor Florian Schiestl and doctoral student Daniel Gervasi used field mustard – a kind of cabbage species and a close relative of oilseed rape. The researchers allowed one plant group to be pollinated solely by bumblebees for nine generations, another only by hoverflies and a third by hand. Afterwards they analyzed the plants, “which differed greatly,” as Florian Schiestl explains.

According to Schiestl, the mechanism of evolutionary change is fact that different pollinators differ in their preferences and thus preferentially cross-pollinate specific plant individuals, much like a plant breeder using individuals with favorable properties. The flies’ considerably lower pollination efficiency is the cause of the increase in self-pollination. The plants essentially help themselves if the pollinator transfers too little pollen.

The fact that the plants change so significantly already after nine generations came as a surprise to the researchers: “The traditional assumption is that evolution is a slow process,” explains Schiestl. The evolutionary biologist from UZH draws the following conclusion from his results: “A change in the composition of pollinator insects in natural habitats can trigger a rapid evolutionary transformation in plants.”

This is particularly interesting as certain pollinator insects such as bees have been vastly decimated by the extensive use of pesticides and the depletion of the landscape in recent decades. According to Schiestl, it would thus be conceivable for plants to increasingly rely on flies as pollinators, which would result in the evolution of weaker flower fragrances and more self-pollination. In the longer term, this would reduce a plant population’s genetic variability and the plants would become more susceptible to disease.

Department of Systematic and Evolutionary Botany