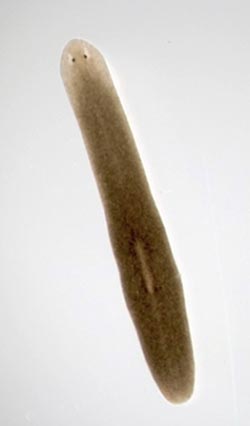 The freshwater flatworm Schmidtea mediterranea lives in southern Europe and Northern Africa is the first animal ever discovered without a crucial structure inside its cells known as the centrosome. (Image credit: UCSF/J.Azimzadeh)<br>

A tiny, freshwater flatworm found in ponds and rivers around the world that has long intrigued scientists for its remarkable ability to regenerate has now added a new wrinkle to biology.

Reporting in the journal Science today, researchers at the University of California, San Francisco (UCSF) and the Stowers Institute for Medical Research in Kansas City, MO, have discovered that the worm lacks a key cellular structure called a “centrosome,” which scientists have considered essential for cell division.

Every animal ever examined, from the mightiest mammals to the lowliest insects, has these centrosomes in their cells.

“This is the first time we’ve found one that didn’t,” said Wallace Marshall, PhD, an associate professor in the Department of Biochemistry & Biophysics at UCSF, who led the research.

The fact that flatworms lack these centrosomes calls into question their purpose, Marshall added. “Clearly we have to rethink what centrosomes are actually doing,” he said.

The Necessity of Even Division
A central component of all multicellular life is the ability of cells to divide — and divide evenly. Before a cell divides, it has to assemble two exact copies of its DNA and then make sure that DNA sorts evenly into the two separate halves as they pinch off. Many health problems arise from cells losing this ability.

A hallmark of cancer, for instance, involves abnormalities in this division. Tumor cells often duplicate extra pieces of DNA. Certain forms of childhood mental retardation are also marked by abnormal divisions, which cause the loss of large pieces of DNA, leading to development problems in certain brain structures.

Centrosomes have been seen as animals’ ultimate evolutionary fix for this problem. Plants and fungi don’t have them, but animals have had centrosomes in their cells, as long as there have been animals. These structures were thought to play a central role in cell division — laying down track-like spindles onto which the cells sort their dividing DNA. Centrosomes were seen as so important to cell division that all animals were assumed to have them.

The discovery that at least one animal doesn’t came quite unexpectedly.

Interested in the basic mechanics of the centrosome, Marshall and UCSF postdoctoral researcher Juliette Azimzadeh, PhD, teamed up with Alejandro Sánchez Alvarado, PhD, a Howard Hughes Medical Institute and Stowers Institute investigator, who has worked with the flatworm Schmidtea mediterranea for several years.

Worm Regenerates Without Centrosomes
With a charming name that masks an otherwise humble appearance, this worm is a puddle wiggler just a few millimeters long at most. But its remarkable regenerative ability has made Schmidtea mediterranea a great scientific curiosity. When cut into tiny pieces, every piece will grow into a perfectly normal worm in a matter of days. Each offspring can then be segmented over and over again as well — it’s how the worm reproduces.

The original intention of the study Azimzadeh, Marshall and Sánchez Alvarado devised was to see what happened to the worm when it lost its centrosome.

Together they manipulated the flatworm to knock out genes needed to assemble these centrosomes. Without centrosomes the worms should have lost their ability to regenerate normally — or so they thought.

They were amazed to find that losing these structures didn’t affect the worms’ ability to regenerate at all. Then they looked more carefully at the worms and discovered that they never had these centrosomes in the first place.

“It came as a surprise to all of us,” said Sánchez Alvarado. What it means, he said, is that the evolutionary pressure that has maintained these structures in nearly all animals may have very little to do with cell division itself.

“There may be another function for centrosomes that is still obscured,” he said.

The article, “Centrosome Loss in the Evolution of Planarians,” by Juliette Azimzadeh, Mei Lie Wong, Diane Miller Downhour, Alejandro Sánchez Alvarado and Wallace F. Marshall, will be published in Science Express on Jan. 5, 2012.

In addition to UCSF and the Stowers Institute, authors of this paper are affiliated with the University of Utah School of Medicine in Salt Lake City.

The work was supported in part by the Howard Hughes Medical Institute, the W.M. Keck Foundation and the National Institute of General Medical Sciences.

UCSF is a leading university dedicated to promoting health worldwide through advanced biomedical research, graduate-level education in the life sciences and health professions, and excellence in patient care.